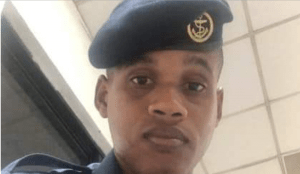 (TRINIDAD GUARDIAN) – An ordinary seaman attached to the Trinidad and Tobago Coast Guard (TTCG) in Staubles Bay was accidentally shot and killed after his colleague’s Galil rifle went off while they were on duty aboard a Coast Guard vessel late yesterday evening.

Coast Guard sources told Guardian Media that Ordinary Seaman Gyasi Richardson, who is in his early twenties and had under a year’s service, was aboard the vessel CG 25, the TTS Speyside, on patrol Down the Islands when the incident happened around 6 pm.

Sources said the vessel was part of an exercise near Chacachacare Island at thew time of the incident. A fellow Coast Guard seaman was reportedly cleaning his rifle on board when it went off, hitting Richardson in the upper body. He was rushed to the St James Medical Complex by his colleagues but was later pronounced dead.

Richardson is reported to have subsequently been reported as having died in what was described as a “negligent discharge.”

One Coast Guard officer who knew Richardson well described him as “quiet and hard-working.”

Relatives of Richardson and several senior coast guard officers were at the hospital late yesterday evening.

In a statement last night, the TTCG said it had launched an investigation into the circumstances surrounding Richardson’s death. The TTCG also extended condolences to members of the families of all those involved and asked that their privacy be respected during these difficult times.