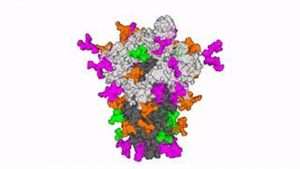 (SKY NEWS) – UK scientists say the coronavirus is “hit and run” and not as well shielded from the immune system as some others – meaning it could be easier to develop a vaccine.

The University of Southampton researchers who made the discovery called it “very encouraging”.

They created a model of the virus that causes the COVID-19 disease, which they say shows how it disguises itself to get into our cells undetected.

The model displays the coronavirus as having several spikes sticking out from its surface, which allow it to attach to and enter cells in the human body.

Professor Max Crispin, who is leading the research, said the spikes are coated in sugars called glycans, which hide their viral proteins so to evade our immune systems.

“By coating themselves in sugars, viruses are like a wolf in sheep’s clothing,” said the professor.

“But one of the key findings of our study is that despite how many sugars there are, this coronavirus is not as highly shielded as some other viruses.

“But in the case of the coronavirus, the lower shielding by sugars attached to it may reflect that it is a ‘hit and run’ virus, moving from one person to the next.”

The HIV comparison is significant, as the research was done using special equipment previously provided by a grant from the Bill and Melinda Gates Foundation through the Collaboration for AIDS Vaccine Discovery.

While COVID-19 is responsible for hundreds of thousands of infections and more than 82,000 deaths worldwide, researchers at Southampton believe their model provides some reason for optimism.

Professor Crispin explained that the “lower shielding” means there are “fewer obstacles for the immune system to neutralise the virus with antibodies”.

He said it was “a very encouraging message for vaccine development”, although any such product is still widely considered to be at least a year away.

The world’s biggest pharmaceutical company, Johnson & Johnson, told Sky News last month it was confident it had formulated a COVID-19 vaccine and wanted to make available on a not-for-profit basis in 2021.

The firm hopes to begin human trials in September, which could mean mass production by early next year.

Back in February, the scientist leading the UK’s research into a vaccine told Sky News that his team had made a significant breakthrough by reducing part of the normal development time from years to weeks.

Professor Robin Shattock, head of mucosal infection and immunity at Imperial College London, indicated that human trials could begin as early as the summer.