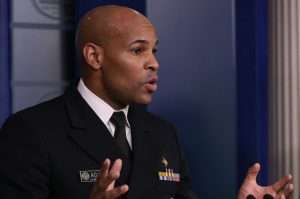 (NEW YORK POST) – US Surgeon General Jerome Adams had good and bad news Tuesday on the coronavirus pandemic, saying that initial death estimates could be too high but that African Americans were at greater risk of contracting the potentially deadly illness.

“I represent that legacy of growing up poor and black in America,” Adams said on CBS “This Morning.”

“And I and many black Americans are at higher risk for COVID, which is why we need everyone to do their part to slow the spread.”

Adams explained that black Americans were more likely to have pre-existing conditions such as diabetes, high blood pressure and heart disease and lack access to health care.

“Those numbers take your breath away,” Chicago Mayor Lori Lightfoot told the paper Monday. “This is a call to action for all of us.”

Those numbers demonstrate the importance of social distancing, the surgeon general said.

“Now’s the time for us to really come together and say, ‘I’m not just doing this for me and my family, I’m doing this for my community and all the communities across the country,’” Adams said.

Adams on Tuesday also said he agreed with the director of the Centers for Disease Control and Prevention that some research models have projected death totals that may turn out to be too high, though neither would offer an alternate estimate.

The White House coronavirus task force projected a death toll of 100,000 to 240,000 a week ago, saying that containing deaths to that range was possible if strict social distance measures were respected, implying it could go even higher.

But Adams told ABC’s “Good Morning America” that he was encouraged by recent data showing a possible “flattening” of the outbreak in some areas.

Asked if he believed the death toll would come in below the dire White House estimate, Adams said, “That’s absolutely my expectation.”

“I feel a lot more optimistic, again, because I’m seeing mitigation work,” he said, adding that he agreed with CDC director Robert Redfield that deaths could fall short of totals that some computer models showed.

The governors of New York, New Jersey and Louisiana pointed to tentative signs Monday that the coronavirus outbreak may be starting to plateau, but warned against complacency.

The coronavirus death toll has surpassed 10,000 in the United States and confirmed cases have topped 367,000.

President Trump responded to the recent White House projection by saying any death toll less than 100,000 would be considered a success.

Redfield said Monday that social distancing of the type ordered by nearly all state governors was effective.

“I think you’re going to see the numbers are, in fact, going to be much less than what would have been predicted by the models.”

A research model from the University of Washington — one of several cited by leading health authorities — forecasts 81,766 US coronavirus fatalities by Aug. 4, down about 12,000 from a weekend projection.

The pandemic has upended daily life around the globe, killing more than 74,000 people and infecting at least 1.3 million.

New York Gov. Andrew Cuomo said statewide deaths from COVID-19 had leveled off around 600 per day in recent days, highest in the nation, though the numbers ticked back up to 731, Cuomo said Tuesday.

“Behind every one of those numbers is an individual, is a family … a lot of pain again today for many New Yorkers,” he said during his daily news briefing.

But hospitalizations, admissions to intensive care units and the number of patients put on ventilators to keep them breathing had all declined, Cuomo said.

In neighboring New Jersey, the state with the second-highest number of cases and deaths, Gov. Phil Murphy said efforts to reduce the spread “are starting to pay off.”