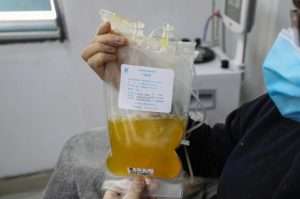 (NEW YORK POST) – Doctors in China say they have preliminary but promising evidence that blood plasma taken from recovered coronavirus patients can be injected into those who are more seriously ill — and aid remarkably in their recovery.

In one study, doctors in Wuhan — the epicenter of the first outbreak of the now-pandemic — gave infusions of blood plasma taken from recovered patients to 10 severely ill coronavirus sufferers.

Within three days, the hospitalized patients’ symptoms improved as the level of the virus in their system dropped, presumably aided by the antibodies they received from survivors’ plasma, the researchers said in their report, which was published Monday by the US National Academy of Sciences. None has died, the scientists added.

Another study by doctors in Shenzhen performed the same plasma infusion on five severely ill coronavirus patients — and all of them improved, with three being weaned off their ventilators within 10 days, the Guardian said, citing a report in the US Journal of the American Medical Association.

Still, results from a wider patient base are needed, researchers said.

The president of the British Pharmacological Society, Munir Pirmohamed, noted to the Guardian that all of the Wuhan patients, at least, were given other treatments, including antiviral drugs, during the study.

“It is also important to remember that there are potential safety concerns with convalescent plasma, including transmission of other agents and antibody enhancement of disease,” he said. “Even if shown to work, scalability to treat large numbers of patients may become an issue.”

Blood plasma is the portion of blood that includes such things as proteins, sugars, lipids including cholesterol and amino acids and vitamins, according to the Merriam-Webster Dictionary.