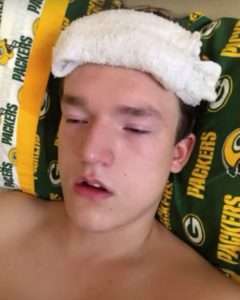 (NEW YORK POST) – An Iowa teen with the coronavirus is warning other youngsters not to underestimate the disease, which left him feeling like he had been “hit by a truck,” according to reports.

Dimitri Mitchell, an 18-year-old freshman at Kirkwood Community College in Cedar Rapids, said he started experiencing a cough and a fever as high as 105 degrees on March 13.

“I was bedridden all day and I felt totally drained,” Mitchell told “Good Morning America” Monday. “My eyes wouldn’t stop watering, I had the worst headache I’ve ever experienced and my cough was just getting worse and worse. It’s the most sick I’ve ever been and I told my mom I felt like I was hit by a truck.”

Doctors initially told Mitchell’s mother, Irena Yoder, that her son didn’t meet the criteria to be tested for COVID-19, she said.

“They said, ‘He’s under 60 years old and he will find his body is strong and he will fight this,’” Yoder said. “So, they sent us home.”

Tests for the flu, pneumonia and strep throat all came back negative, but Yoder, who works as a lab technician at the hospital where her son was taken, decided to stay home from work to care for her ailing son, she said.

But just three days after the initial visit, Yoder returned with her son to the emergency room as his condition worsened and contacted the Iowa Department of Health, which later recommended Mitchell be tested. The screening came back positive, she said.

“Every 10 to 15 minutes I was checking on him because he was breathing so hard,” Yoder said. “I never thought my son would get it. He was perfectly healthy, playing sports. So what we’ll learn [is] it can hit any age of people. It doesn’t ask permission.”

Mitchell, meanwhile, said he “definitely did have a false sense of security” prior to contracting the virus, he told WHO-TV.

“I never thought I would get it,” Mitchell told the station, adding he started feeling sick after a trip with friends in early March. “At first it started out with a cough, but it started getting worse and worse. I was coughing up tons of mucus.”

Illness due to COVID-19 is typically mild, particularly for young children and adults, but older people and those with pre-existing medical conditions appear to be more at risk of getting severely sick, according to the World Health Organization.

Mitchell, who still has a mild cough, is on the path to recovery after going one week without a fever.

“I think no matter what your age is, regardless if you have health conditions of not, make sure you follow the social distancing guidelines,” Mitchell told ABC. “Don’t treat it like you’re immune and you can’t get affected.”

Mitchell’s mother, however, has been quarantining herself after experiencing some of the symptoms her son had previously endured, she said.

“We cough so much, and it’s deep and dry,” Yoder told WHO-TV. “I feel like a fine, broken glass going through my throat, deep in my chest and it burns like a fire.”