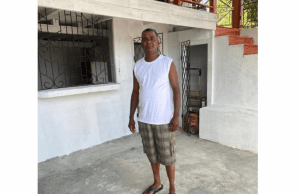 (NEWS ROOM GUYANA) – A land surveyor of Haswell, Port Mourant succumbed after he was bitten and collapsed during a fight over pay just after dawn Tuesday.

According to information, the suspect, identified as Latchman Looknauth called Latcho, 56, went to the home of Mangru, his employer, to collect his salary when an argument ensued after Mangru refused to pay.

The News Room understands Looknauth threatened to report his boss to the Police over the refusal of payment. Mangru became annoyed and picked up cutlass and fired at Looknauth, causing injury to head.

In defense, Mangra grabbed Looknauth and bit him to the hand in an effort to try to get him to drop the cutlass. Looknath fell to the ground and he, Looknauth, pushed him away and ran off.

He made his way to the Port Mourant Hospital a short distance away to seek medical help; afterwards, he made a report at the Whim Police Station.

Mangru, who was left in the vicinity of his gate, was picked and rushed to the Port Mourant hospital here he died while receiving medical condition.

He received injuries to his left hand, right foot and left side jaw, most likely as a result of the fall, Police reasoned.

Looknauth was placed in Police custody assisting with investigation.