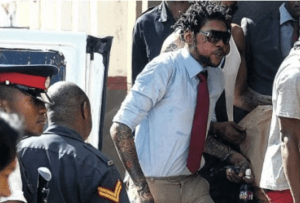 After a near two-year wait, the Court of Appeal this morning handed down a judgment affirming the murder conviction of the popular entertainer.

The court also upheld the convictions and sentences for dancehall artiste Shawn Storm and two other men, Kahira Jones and Andre St John.

With the ban on public gatherings of more than ten persons as part of the measures to contain the spread of the coronavirus, the decision by the Appeal Court was handed down via a conference call between the panel of three judges, prosecutors and the attorneys for the four men.

President of the Court of Appeal Dennis Morrison, Frank Williams and Patrick Brooks heard the appeal.

In April 2014, Kartel, whose real name is Adidja Palmer, Shawn Storm, given name Shawn Campbell, Jones and St John were convicted for the August 2011 killing of Clive ‘Lizard’ Williams at a house in Havendale, St Andrew.