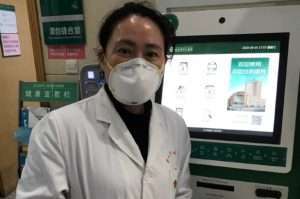 (NEW YORK POST)- A Chinese doctor who claimed her bosses tried to silence her early warnings about coronavirus appears to have disappeared — stirring fears that she was detained, according to new reports.

Ai Fen had pointed out cases of the illness to colleagues at Wuhan Central Hospital, eight of whom were reprimanded themselves, Radio Free Asia (RFA) reported.

The whereabouts of Ai, who is head of the emergency department, are now unknown, 60 Minutes Australia reported Monday.

“Just two weeks ago the head of Emergency at Wuhan Central hospital went public, saying authorities had stopped her and her colleagues from warning the world,” the outlet tweeted. “She has now disappeared, her whereabouts unknown.”

Soon after the program aired, Ai posted a cryptic message to her page on the Chinese social media site Weibo.

“A river. A bridge. A road. A clock chime,” read the post, coupled with a Wuhan cityscape photo.

Nearly two weeks earlier, she had posted, “Thank you for your care and love. I’m fine at the moment and I’m still working.”

And on Wednesday, she shared a post captioned, “Happy April Fools Day,” showing her wearing a lab coat and mask, apparently at work at the hospital.

But RFA reported that detainees in custody in China have been known to either update their own social media accounts under authorities’ orders, or police may do so after gaining access to their devices.

In a now-deleted essay published in China’s People (Renwu) magazine titled “The one who supplied the whistle,” Ai detailed her boss’ efforts to silence her, RFA reported.

In the article, Ai said the reprimand came after she took a photo of a patient’s test results and circled the positive “SARS coronavirus” result in red.

China has been accused of attempting to cover up the coronavirus outbreak before the crisis escalated.

Back on Dec. 30, Dr. Li Wenliang — who worked with Ai and who died in early February — sent out a warning over the WeChat messaging app advising fellow med school grads to wear protective clothing to avoid infection after several patients from a local seafood market exhibited symptoms similar to SARS.

His attempts to sound an early alarm were denounced by authorities for “rumormongering.”

In a startling admission of error late last month, the ruling Communist Party said Wuhan’s police force revoked its admonishment of the doctor, which had included a threat of arrest.

China on Wednesday reported more than 1,300 asymptomatic coronavirus cases — the first time it has released such data following public concern over people who have tested positive without any symptoms of the illness, according to Agence France-Presse.

Health officials also reported the first imported case of COVID-19 in Wuhan — a Chinese national studying in the UK, who arrived in the city last week as it began to lift its travel restrictions.

A total of 81,554 infections and 3,312 deaths have been confirmed in China — most of them in Wuhan and surrounding Hubei province.