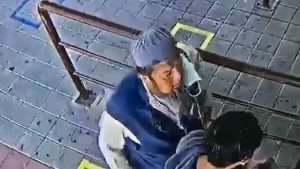 (NEW YORK POST) – Horrifying video shows a coronavirus-stricken man spit in the face of another traveler in Thailand before boarding a train and dropping dead.

Anan Sahoh, 56, tested positive for the virus after he was discovered dead Tuesday on the train from Bangkok to the southern city of Narathiwat, Metro UK reported.

Before embarking on the journey, Sahoh was seen on surveillance footage spitting on an unidentified man buying tickets at the Bang Sue station in Bangkok, the outlet reported.

He then passed a mandatory temperature check to board the train, where he was seen vomiting and coughing, the outlet reported.

Sahoh later fatally collapsed in front of a toilet when the train reached the Thap Sakae district station, the report said.

Medical personnel performed tests on him that confirmed he had been positive for COVID-19, the outlet reported.

Thakoon Intrachom, the director of Thailand’s State Railway, said they’re now trying to track down the straphanger who was potentially exposed to the man, according to the report.

“We are now worried about a man that was spat at in the security camera footage,” he said. “Initially, we coordinated with the railway police but they have not found him yet. We want to announce that if anyone knows him or if he has heard about the news, then he should please go to the hospital immediately.”