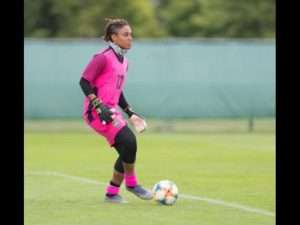 (JAMAICA GLEANER) – She is very good at saving penalties, but her biggest save may be against the novel coronavirus (COVID-19).

Jamaica’s senior women’s football tea goalkeeper, Nicole McClure, came down with the virus recently but has fought and defeated the deadly disease.

“I had all the symptoms. I ached all over, and it felt like someone was sitting on my chest,” she told The Gleaner from her mother’s home in Brooklyn, New York.

“I went to urgent care, but they did not test me. I was not tested because I am not a healthcare worker or a first responder,” she said.

McClure said that she was given Canuflu and sent home.

At home, she was given home remedies.

Pointing out that she had no underlying medical conditions, McClure said that she has self-isolated for the past two weeks and is now feeling much better.

“It shows that anyone can get it. It is not doom and gloom because you can recover as I did,” she said.

McClure said that one should be careful and take all necessary precautions.

“Adhere to what you are being told by healthcare professionals,” she said. “Practise social distancing as well as all the other precautions that they advise.”

She said that she has no idea how she contracted the virus, but she knew that she was not going to allow it to defeat her.

McClure was a member of the history-making Reggae Girlz team that competed in the FIFA Women’s World Cup tournament held in France last summer.

McClure, who last played for Sion Swifts WFC in Northern Ireland, said she finished her contract last October and was home working.

“What I want to say to young people out there is don’t believe that you cannot be affected by the virus,” she sad. “It not only affects seniors, but can hit anyone.”

A dietitian at Brookdale Hospital in Brooklyn, Sharon said that she was tested, and four days later, she was informed that her results had come back positive.

“I was not hospitalised but was told to go home and treat it like the flu,” Mrs McClure said.

Like her daughter, she also used various home remedies.

She said that the doctor told her that if she started having breathing problems, she should return to the hospital.

“Although I experienced shortness of breath, I did not go back to the hospital because it was not bad enough to warrant my going back,” she said.

Mother and daughter are both doing fine and their two-week self-isolation is just about over.

However, they both vowed to remain vigilant and adhere to all guidelines put forward by authorities.