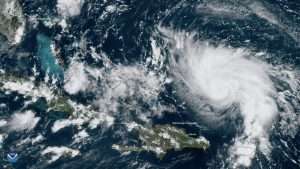 CNN – Sixteen named storms, including eight hurricanes, are forecast for the 2020 Atlantic hurricane season, according to early predictions released Thursday by experts at Colorado State University.

Four of the hurricanes will become major storms of Category 3 to 5, with sustained winds of at least 111 mph, the projections indicate for the season that runs from June 1 to November 30.
The chance that at least one major hurricane will make landfall in 2020 along the US coastline is 69%, compared with an average over the last century of 52%, researchers said. There is a 95% chance — the average is 84% — that at least one hurricane this year will make landfall in the US.
What it’s like riding out Hurricane Maria 01:29
“The last season with four or more major hurricanes was the record damage-causing year of 2017 that saw Hurricanes Harvey, Irma and Maria,” CNN meteorologist Brandon Miller said. “All caused significant damage in the US and Caribbean.”
Six major hurricanes formed that year in the Atlantic basin. The seasonal average is 12 named storms, including six hurricanes.
The forecasts do not precisely predict where the storms might strike, and the probability of landfall for any single location is low.
“Coastal residents are reminded that it only takes one hurricane making landfall to make it an active season for them,” researchers Philip Klotzbach, Michael M. Bell and Jhordanne Jones wrote in the report.

Confident in their forecast

The above-normal activity was predicted consistently across types of forecasts, Klotzbach said.
“This year, we used four different techniques to develop our forecast,” he told CNN Weather. “And they all point towards an active season.”
Colorado State in its April predictions hasn’t forecast four major hurricanes for a season since 2013 — a year that didn’t quite perform as the early forecast expected.
“I’d say that this year, we’re pretty confident,” Klotzbach said, citing a lack of El Niño conditions that can mess with expectations.
When El Niño is present, it reduces Atlantic hurricane activity due to increased vertical wind shear — changes in wind speed and direction with height that prevent hurricanes from building.
Average conditions create a more favorable environment for tropical storm development
“Also, the tropical Atlantic is quite a bit warmer than it has been the past few years at this time,” Klotzbach said.
Sea surface temperatures are one of the ingredients needed to fuel hurricanes. The warmer the ocean, the more fuel available for the storms to tap into.
Although four major hurricanes are forecast this season, that doesn’t mean any necessarily will hit the US coast.’
“Two of the last three years have had major hurricane landfalls in the US (2017 and 2018),” Miller said. “Before that, there was a 12-year drought without a single major hurricane landfall anywhere in the country (from Hurricane Wilma in 2005 to Hurricane Harvey in 2017).”
“The last major hurricane to strike the US was Hurricane Michael in 2018,” he said.

Forecasting this far in advance can be accurate

The models are based on 40 years of data and conditions, including sea surface temperatures, sea level pressures, vertical wind shear levels and El Niño.
April is about the earliest experts can get a good indication of what conditions will be like during the hurricane season.
“We find that there is just too much uncertainty with the future state of both (El Niño) and the Atlantic prior to that time,” Klotzbach says.
Still, these statistical and dynamical models fail in some years, the researchers made clear.
“Last year, we forecast a near-average hurricane season and ended up a bit more active than we thought,” Klotzbach said.
Their April 2019 forecast predicted five hurricanes for that year; six were observed. They forecast two of those to be major hurricanes; three were observed.
Their April forecast did vary significantly from the total number of named storms in 2019: 13 were predicted, while 18 formed, though many were short-lived and weak.
This marks the 37th year that the university’s team has issued an Atlantic seasonal hurricane forecast. The official forecast from the National Oceanic and Atmospheric Administration will release in May.
The hurricane research team from Colorado State will also release updated forecasts on June 4, July 7 and August 6.