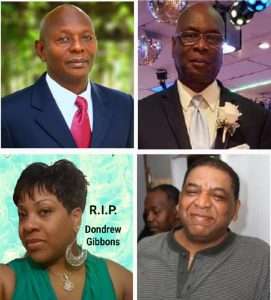 (BARBADOS TODAY) – Four Barbadian nationals in the United States have died from the dreaded coronavirus wreaking havoc in the country now deemed to be the epicenter of the respiratory illness according to experts.

Barbados’ Consul General Mackie Holder who is based in New York told Barbados TODAY that over the last four days the Barbadian community has been rocked by the deaths, two of which occurred in Brooklyn, one in Connecticut and the fourth reported just yesterday.

“Pearson Jordan who is well loved and known, passed as a result of COVID. Pearson was from Speightstown, St Peter. He represented Barbados in the Olympics, he was a very well known athlete. Unfortunately, he had pre-existing conditions. A very nice and popular guy, it really hit home.

“In quick time after that we had word that Cedric Robinson who is also very popular, he was a mechanic, originally from the Sargeant’s Village, Christ Church area, had died. So that was a one-two whammy, so that really brought it close to home. Friday night, Saturday was not a good day for the Barbadian community. Big people were literally crying.”

Holder also expressed regret at the passing of 45-year-old Dondrew Gibbons who lived in Connecticut.

The fourth person, Michelle Boxhill, a second generation Barbadian, born in the United Kingdom, had lived in Brooklyn.

The Consul General who has been working from home in Queen’s, New York also revealed that a number of Barbadians are receiving treatment.

“There are also quite a few Barbadians who are in various stages of protocols, some are in self quarantine, some are getting treatment, one or two are in the hospital,” he revealed.

Describing the situation in New York as sobering, he also noted that it was severely impacting families.

“There are a couple of people, Barbadians who would have lost relatives in the last week or two, the head of the Barbados Nurses’ Association Cicely Wilkinson, she lost her mother, and is unable to come to Barbados. All those things are really, really tough. There are some people who are stranded, nobody knows when this thing is going to ease up at all. It is a very serious situation,” he lamented.

The Consul General noted that while the Barbados Office located on Second Avenue in Manhattan is closed, he holds a weekly telephone conference every Monday with the heads of Barbadian associations to keep in touch with Barbadians.

On Tuesday, the coronavirus death toll in the United States passed the figure reported in China, where the outbreak began.

According to a tally from Johns Hopkins University, the number of recorded cases stands at 175, 000. At least 3, 400 have died.

New York has seen the largest number of infections with 75, 795 confirmed cases.

Holder described the unfolding crisis in New York as “very extreme,” adding, “it was getting better now in terms of health management.

“A number of hospitals are over-run and those who are following would have seen the Governor and the Mayor pleading for assistance.

“I think the health management is getting slightly better. They have established a hospital in the Javit Center so that is operational as from Monday. The president has sent a medical ship to New York to deal with non-COVID cases so I think that after all the pleas last week and the week before hospitals are now getting supplies, “ he said.

Holder, who stayed clear of commenting on how American officials handled the situation, however had high praise for Barbados’ response.

“This is not about comparing. Barbados was one of the first countries that moved on this – it took a while for things to get going here [In New York],” he said.

“I am impressed about the number of testing kits that are in Barbados, the work of the foreign minister to link with health agencies around the world to ensure that Barbados has the supplies and assistance it needs, the preparation of the quarantine and isolation centres,” he said, pointing to reports that Cuban nurses and doctors will soon be joining the COVID-19 response in Barbados.

He stressed it was now up to Barbadians to follow the protocols to safeguard their health and country even as he expressed concern about the rapid increase in infections which stand at 34.

“We are now at 34 cases. We went to that number from where we were last week, quickly.

“When things like this happen we have to be aware the government has to act, people have to act. Life matters, if you are alive you can build back an economy, you can’t do anything if your country is devastated by death,” Holder warned.