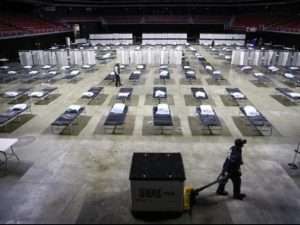 (AP) — New York’s governor put out an urgent plea for medical volunteers and a Navy hospital ship pulled into port Monday as coronavirus deaths in the city mounted and hospitals buckled in what authorities say could be a preview of what other communities across the US could soon face.

“Please come help us in New York now. We need relief,” Governor Andrew Cuomo pleaded as the number of dead in New York State climbed past 1,200, with most of those victims dying in New York City.

He added: “Whether it’s Detroit, it’s New Orleans, it will work its way across the country.”

Elsewhere around the world, hard-hit Italy and Spain saw their death tolls climb by more than 800 each even as the World Health Organization’s emergency chief said cases in the two countries are “potentially stabilising.” At the same time, he warned this is no time to let up on tough containment measures.

A US Navy hospital ship with 1,000 beds arrived in port in New York to help relieve the crisis gripping the city. The USNS Comfort — also sent to New York City after 9/11 — will be used to treat non-coronavirus patients while packed hospitals deal with those with COVID-19.

Also, nurses and other medical professionals who have volunteered to help have begun arriving.

There is no American who is immune to this virus,” Cuomo said.

The US reported over 140,000 infections and more than 2,500 deaths, with New York City the nation’s worst hot spot, but New Orleans, Detroit and other cities are also seeing alarming clusters.