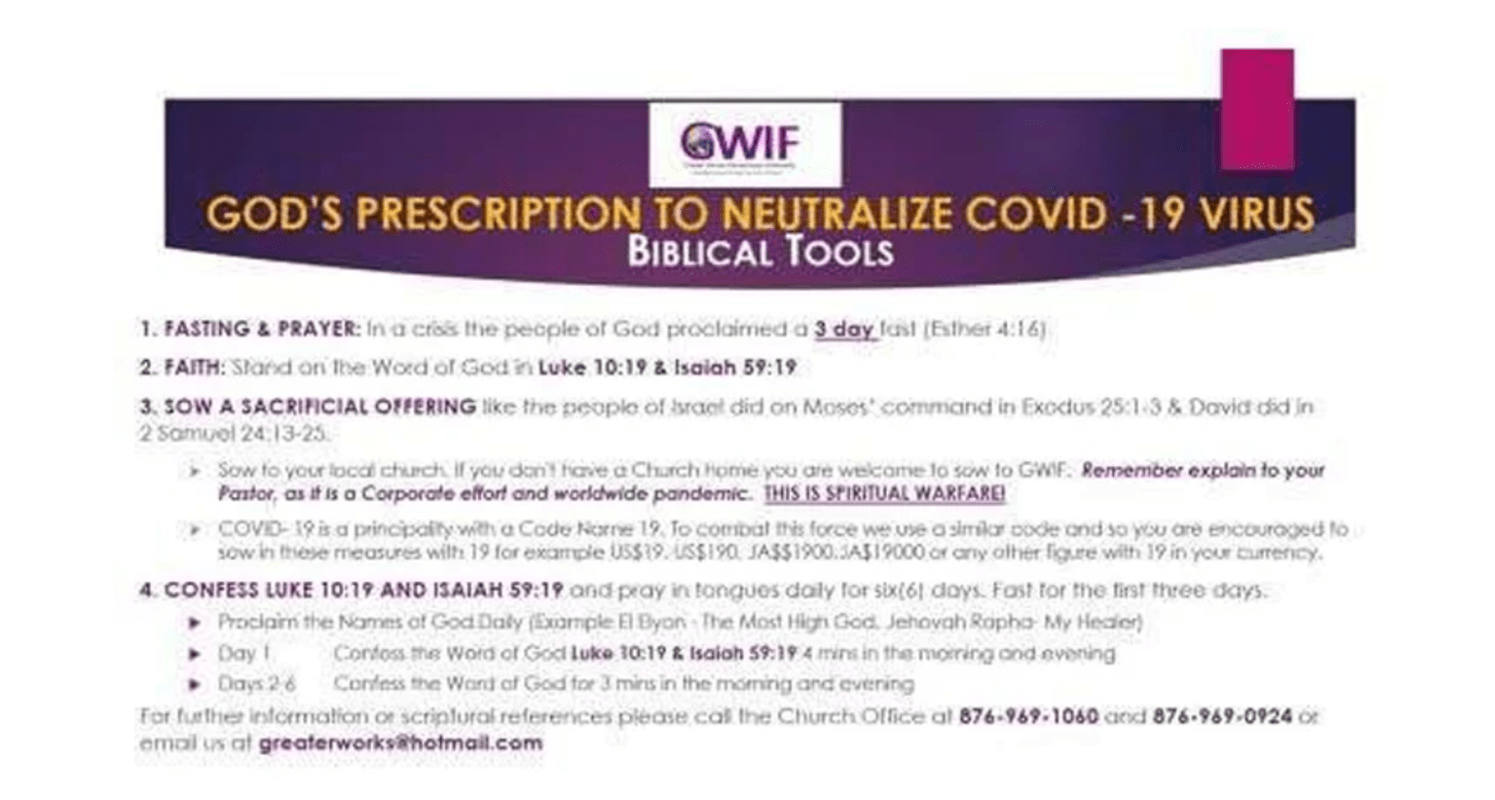 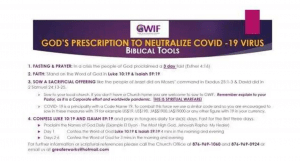 (JAMAICA OBSERVER) – The leadership of the Calvary Baptist Church in Montego Bay, St James, has sought to set the record straight regarding controversy over an advertisement it placed in the media regarding the contribution of tithes and offering during the suspension of church services as a result of the local coronavirus (COVID-19) threat.

The advertisement, which directed members of the church to transfer their contributions to a bank account, received flak from social media users who labelled the institution as money-hungry in a time of crisis.

Reverend Everton Jackson, pastor of Calvary Baptist, told the Jamaica Observer that after Prime Minister Andrew Holness announced the restrictions concerning the number of people allowed to gather within buildings and public spaces, the church council met to determine how it would go forward.

“Our church council had a conversation via WhatsApp. They [members] took the decision that we would not gather at the church but instead live stream our worship; and we would target the elderly and offer a rapid response service to them as they would be the most vulnerable — those who need their prescriptions to be filled, those who need groceries at the supermarket. Thirdly, we said we would prepare packages for distribution targeting the elderly, the poor and disadvantaged of society. After we had that conversation, it was mooted that if we go that route, we needed to see how we could get that information out to the members of our congregation,” Jackson said.

Subsequently, the decision was taken to place an advertisement in the Western Mirror newspaper because of its popularity amongst his members.

“We would not have been able to meet anybody in worship to share, so we felt somewhat retarded until the idea came to use social media and a western newspaper in as much as we are in the west and a number of our members access that paper. Included in that was to provide also an opportunity for our members, who are able, to empower the church to do the things we said we wanted to do,” he explained.

Jackson added: “That notice spoke to worshippers, meaning worshippers at Calvary. We do not solicit financial aid from the public. Whatever social outreach ministry we are going to execute will have to come from us, and the COVID-19 does not necessarily take away the giving powers of some of us. That was the thinking — those of us who can, let us continue to give so that we can prepare packages, reach out to people and help people during this time of crisis.”

In relation to the specifics of the advertisement, Jackson said the first draft came back with a bill of over $40,000 and subsequently, a decision was made to just lay out the basics as they were challenged to stay within budget in order to maximise on the outreach.

“In the budget there are nine items that speak to social welfare services, educational assistance, medical assistance, funeral assistance, compassionate grant, among other things. We erased the number of things we had and went with the basic information of how people could give to the church. In my view, the advertisement was misread, misinterpreted and mispresented…The Calvary Baptist Church is one of the most reputable churches n Jamaica, in western Jamaica, and in the world. As we speak our team members are currently on the ground. We have a rapid response team comprising of persons from Salt Spring, from Bogue Hill and from Calvary — the three churches I pastor.

“We went to one of the elderly persons who needed her medication, I got her prescription, went to the pharmacy, got it for her. I got groceries for people who were unable to go to the supermarket. When it came to my attention that we were being heavily criticised for the ad and some of the conclusions drawn I was really taken aback,” Jackson said.

Jackson further stressed that the intent of the advertisement was not about soliciting tithes and offering.

“It is an option given to those who are able to help the poor, the needy. The Government just outlined a stimulus package. That stimulus package does not in any way include the Church. The same persons who are saying the Church should not, are the same persons who would ask the question what is the Church doing? Perhaps one could look at it this way. Coronavirus, COVID-19 creates an opportunity for the strong to help the weak,” he said.

Jackson further stated that the Church is a conduit to which the strong can help the weak, and so, the financial contribution of members who are able to give to the Church is to empower and enable the Church to the most vulnerable, many of whom, Government aid may never reach

“Our action of compassion and our practical demonstration of the gospel is to compliment what the Government is doing. It is not to replicate or waste resources. It is an admission that the Government will never ever be able to reach everybody and the Church is positioned based on its social outreach ministries and its theology, to be the right agency to execute a ministry of care and compassion to the disadvantaged of society. It should never ever be conceived that because of COVID-19 nobody is to be neighbourly in relation to their financial resources. In fact, it is the reverse, it should now be seen as an opportunity for those who are able to reach out with their financial resources to help those occupying the underside of society. At this time the Church stands in solidarity with hurting people, not just through speaking, but with practical engagements and practical activities,” Jackson said.

The various online commentaries come after a directive was given for members to sow a sacrificial offering in the 19 range – US$19, US$190, JA$1,900, JA$19,000 as that was God’s prescription to neutralise the COVID-19 virus.

When contact was made with the church, communications director Petra-Kene Williams clarified that the circulation on social media was a response to a direct message asked by an overseas member on how they could give.

After the clarification, Williams was asked if the Sunday Observer could speak to Scott or any other leader of the church to which she questioned the motive of the story, likening it to mischief.

Williams further said that if the leadership gives a directive, the members just obey. While on the defensive, her contention was that the media had an agenda to portray GWIF in a bad light.

Moreover, she requested the questions to determine if they warranted a response. Up to press time, the questions, which sought to ascertain information about seed sowing, the members response to the directive from Scott and how GWIF would be going about helping to fight COVID-19 in practical ways, were not answered.

1. Please explain the concept of seed sowing? (Origins, examples, purpose)
2.What’s the relevance of seed sowing?
3.How will this help in the fight against COVID-19? (For clarity, will it be used to assist the vulnerable populations within the church body, purchase supplies, medication, etc?)
4.Why should people give, especially in this time?
5.What has been the response of church members to the directive to sow seeds in the 19 range?
6.Is the directive from Apostle Andrew Scott only meant for members or is giving open to the public?
7.If someone reads the article and wishes to sow a seed, how can they do so?
8.Apart from seed sowing, what is GWIF’s plan of action in the fight against COVID-19?
9.What sort of adjustments has GWIF made in relation to the directives from Gov’t that have limited the number of people that can gather in one space?
10.How have members reacted to the general news of COVID-19?
12.How has GWIF been encouraging members regarding prevention strategies to avoid contracting COVID-19?