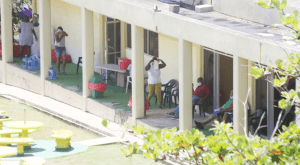 (TRINIDAD GUARDIAN) – Another person who was quarantined at Camp Balandra has tested positive for the COVID-19 virus.

Guardian Media was told the latest patient is a woman in her 20’s, who had been isolated from the other 27 people in quarantine at the facility for the past several days.

She is said to be pregnant and has been transferred to the Couva Hospital for treatment.

The group of 28 was part of a larger group of 68 people quarantined at Camp Balandra since March 17 after being brought into the country on a chartered flight. They were all on a cruise aboard the Costa Favolosa when the vessel was denied entry to Martinique after passengers onboard tested positive for the virus.

On March 21, 40 members of the group tested positive for COVID-19 and were transferred to the Couva Hospital for treatment.

The 14-day quarantine period for the remaining 28 was restarted and with this latest case, one of the group said the quarantine has been restarted again.

According to a release from the Ministry of Health on Thursday afternoon, there were 65 confirmed cases of COVID-19 in T&T.

The ministry said 47 of those were passengers of Costa Favolosa- 44 from the group of 68 and three people from the cruise who returned to T&T separately. There has been one death so far from the virus in T&T.

In an interview with one of the remaining 27 people at Camp Balandra, Guardian Media was told that the latest person to test positive was only confirmed on Wednesday night.

But the source said there is now concern among the group that the woman may have caught the virus while at Camp Balandra.

“My main concern that people who are healthy stay healthy because it begs the question: Did she get it here? We may need another quarantine after this one,” the source said.

And although the facility is less cramped with only 27 remaining people, there are still rooms with no ventilation, the source said.

“Is it that quarantine is a petri-dish for the virus?” the source asked.