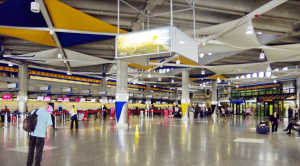 (JAMAICA GLEANER) – Two Jamaican men are hungry and homeless after being stranded by Caribbean Airlines.

Miguel Bailey and Lendert Pearson are lamenting being forced to sleep at the Grantley Adams International Airport in Barbados since Monday night.

Bailey and Pearson are among 51 Jamaicans, including students of the Cave Hill campus of The University of the West Indies, unable to leave the Eastern Caribbean islands of Antigua & Barbuda, Dominica, and Barbados after the Trinidad and Tobago-owned carrier cancelled their flights to Jamaica commencing Monday.

The airline was reacting to an announcement made by the Jamaican Government that the country’s airports and seaports were closed as at 11:59 p.m. on Saturday, March 21. Exemptions were given for certain categories of Jamaicans up to March 24.

Bailey and Pearson, who are clothing traders, said that they had been in St Lucia since February, and it was representatives of Caribbean Airlines who contacted them to head to Barbados to catch their flight, which was scheduled to depart at 7:15 p.m. on Monday, March 23. By the time they reached Barbados, they were informed that their flight had been cancelled because of the border closure.

“So we reached out to Jamaica’s honorary consul here in Barbados, and she referred us to a shelter, but it is mainly vagrants staying there. The mentally ill, drug addicts are who stay there, and the infrastructure is poor,” Bailey told The Gleaner.

Efforts to get a comment from the Caribbean Airlines local communications representative, Odette Dixon, were unsuccessful. Calls to her phone went directly to voicemail.

Bailey, in particular, said he feared staying there, so he contacted an old acquaintance who agreed to keep their bags but could not offer any accommodation.

The two said they have run out of money and have no food.

“It is a good thing I brought some tea bags from St Lucia because that was all I had today – tea,” Bailey said yesterday, adding that he learnt that negotiations were under way between the Jamaican and Trinidad and Tobago governments.

“Our own Government caused this confusion. They closed the borders, then opened them back. However, after they made the first announcement, Trinidad pulled its planes and its staff, so all their aircraft are back in Trinidad,” Bailey told The Gleaner.

The men said they had moved from the airport and would be sleeping near a popular nightspot in the open near shops so they could feel safer.

When The Gleaner contacted Jamaica’s honorary consul, Ella Hoyos, she said that efforts to get Caribbean Airlines executives to arrange a flight proved futile as the application was denied.

The absence of flights to take home the Jamaicans has affected students at the UWI, Cave Hill.

President of the Jamaica Association of Students at Cave Hill, Dorain Clarke, said that although some students were panicking because they were far from home and family, they were comforted by Hoyos’ outreach.

Audley Deidrick, president and chief executive officer of the Airports Authority of Jamaica, said that after the first announcement of the closure of the borders, concerns were raised about Jamaicans across the globe who might be en route home or had confirmed flights.

“As a result, we extended the date to midnight Monday, March 23rd, and all airlines were advised, including Caribbean Airlines. So only the airline can say why they decided to cancel the flight,” he told The Gleaner last night.