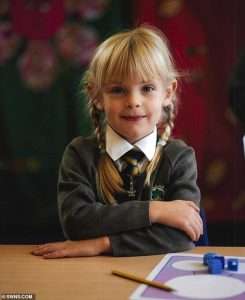 (DAILY MAIL UK) – The family of a seven-year-old girl who was stabbed to death in a park have paid tribute to their ‘beautiful’ daughter who was ‘full of joy, love and laughter’.

Tragic Emily Jones was murdered in a ‘random and unprovoked’ attack in Bolton on Sunday afternoon as she enjoyed a day out with her parents.

The seven-year-old sustained ‘horrendous injuries’ – believed to be to her neck – and died a short time later despite the ‘best efforts’ of her family and paramedics.

A 30-year-old woman, who was not known to the family, was arrested on suspicion of murder and has since been sectioned under the Mental Health Act.

She remains in a highly secure facility, police said.

Today, her ‘beyond devastated’ parents described their only daughter as a ‘social butterfly’ who had a ‘passion for the outdoors’.

Paying tribute to Emily, her parents said: ‘Emily was seven-years-old, our only child and the light of our lives.

‘She was always full of joy, love and laughter.

‘Emily had such a cheeky smile and was beautiful inside and out. She had a heart as big as her smile.’

They added: ‘Emily was never happier than when she was spending time with her family and friends, she was our own little social butterfly.

‘Emily had a passion for the outdoors and loved to play any sport, even when she was wearing her pink sparkly dresses.

‘We are beyond devastated that this random act of violence means that we will never get to see our beautiful little girl grow up into the wonderful young lady she was showing such promise of becoming.

‘It is truly heart breaking to wake up to a world without Emily in it and we cannot comprehend why this has happened.

‘We would like to thank the members of the public that assisted us in the park and express our gratitude to the emergency services for doing their upmost to save Emily’s life.

‘Thank you to everyone for their kind messages of support and for continuing to respect our privacy at this difficult time.’

Police were called to Queen’s Park in Bolton, Greater Manchester, following reports that a child had been stabbed shortly before 2.35pm on Sunday.

Emergency services attended and found that Emily had been attacked by a woman with a knife.

She tragically died a short while later despite the best efforts of her family and medical responders.

A cordon had remained in place at the 22-acre park while specialist officers carried out investigations at the scene.

The cordon has now been lifted and the park has been closed in response to the coronavirus pandemic.

Chief Superintendent Stuart Ellison of Greater Manchester Police said: ‘There are no words that can express how tragic the incident was.

‘An innocent seven-year-old girl lost her life in such a cruel way and our family liaison officers are doing their upmost to support her family.

‘Queen’s Park has now been closed in line with Government advice concerning the country’s response to coronavirus.

‘The police cordon has been lifted but there will continue to be a heavy police presence in the area throughout the coming days.

‘We understand that a number of people witnessed this horrific incident.

‘If you or anyone you know has been affected by what happened, we have ensured that specialist support is available via Bolton Council.

Detectives are continuing to appeal for information.