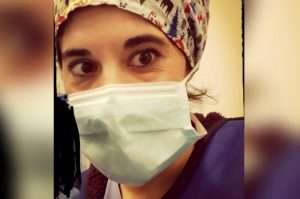 (NEW YORK POST) – A 34-year-old Italian nurse working on the front lines of the coronavirus pandemic took her own life after testing positive with the illness and terrified that she had infected others, according to a report.

Daniela Trezzi had been suffering “heavy stress” amid fears she was spreading the deadly bug while treating patients at the San Gerardo Hospital in Monza in the hard-hit region of Lombardy, the Daily Mail reported.

She was working in the intensive care unit while under quarantine after being diagnosed with COVID-19, according to the UK news site.

The National Federation of Nurses of Italy expressed its “pain and dismay” over Trezzi’s death, which came as the country’s mounting death toll surged with 743 additional fatalities Tuesday.

“Each of us has chosen this profession for good and, unfortunately, also for bad: we are nurses,” the federation said.

“The condition and stress to which our professionals are subjected is under the eyes of all,” it said, adding that “a similar episode had happened a week ago in Venice, with the same underlying reasons.”

Hospital general manager Mario Alparone said Trezzi had been at home sick since March 10 and that “she was not under surveillance.”

The nurse’s death is under investigation.

About 5,760 health-care workers have been infected by the virus, according to figures released Tuesday by an Italian research institute.

Those workers account for about 8 percent of the country’s total cases, which rose to 69,176 on Tuesday.