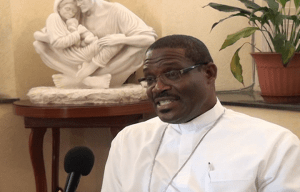 (St Lucia News Online) – Bishop of the Diocese of Roseau, His Lordship, Gabriel Malzaire has suspended all Catholic public religious gatherings in Dominica effective on Monday in light of the coronavirus (COVID-19).

Dominica has reported two cases on the deadly virus.

In a statement on Monday, he called on the clergy and Catholics on the island to “strictly adhere” to a list of guidelines he gave.

“Effective immediately, all public church gatherings, including Lenten Retreats, Sunday and weekday Masses are suspended until further notice,” he said.

Malzaire stated that funerals should be attended by no more than 10 person and should be held in a reasonable short period of time.

The important Catholic service, the Chrism Mass will be held at the Cathedral Chapel on Wednesday, April 8, 2020 with a group of the clergy.

“The celebrations of the Lord’s Supper on Holy Thursday, the Lord’s Passion on Good Friday, Easter Vigil and Easter Sunday Masses will take place at the Cathedral Chapel and Parish Churches with no more than 10 people,” Malzaire said.

He stated that “arrangements are being made to provide a live stream of all the Sunday Masses and Holy Week celebrations from the Cathedral Chapel on Dominica Catholic Radio, television and social media in order to give the faithful the opportunity to unite themselves to these celebrations while remaining at home.”

He added , “Therefore, due to this grave circumstance the faithful are dispensed from their Sunday obligation and can make spiritual communion by following the Mass via television, radio of other social media.”

Malzaire said that although public church gatherings are suspended, churches will remain open for private prayers.