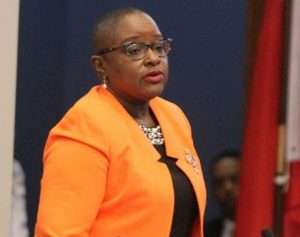 (TRINIDAD NEWSDAY) – The Government will provide financial support to people who are retrenched or terminated as a result of the covid19 pandemic.

This support will come in the form of public assistance grants and is one of a number of measures presented by Social Development Minister Camille Robinson-Regis.

She made the announcement while speaking to the media during a briefing after a special Cabinet meeting on Wednesday.

Robinson-Regis said the committee examined the most vulnerable in communities and those who would suffer the fate of a reduction in income. They also looked at those who may be unemployed, including those in the entertainment industry and bars that will be closed.

Robinson-Regis said people who receive help through the TT Food Card would receive a top-up.

An estimated 2,604 households with six or more people will receive an additional $450.

“This is in addition to what the food card already provides, because they will become even more vulnerable,” Robinson-Regis said.

She said the committee recognised that children benefit from the school feeding programme and the Government would bring those people onto the food card system in order to ensure the nutritional needs of these children are met.

She also announced increases to the public assistance and disability assistance grants.