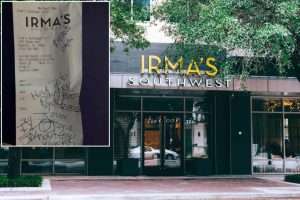 (NEW YORK POST) – Even tips are bigger in Texas.

An anonymous Texas diner demonstrated a heart of gold after leaving a $9,400 tip to aid their local eatery amid the coronavirus-caused restaurant closures.

The couple had reportedly arrived at Irma’s Southwest in Houston Monday to catch an early dinner before the county’s restaurants reverted to takeout-only service due to the coronavirus pandemic, CNN reports.

The timing was fortuitous, as “we had to let our staff know that we may be off work for 15 to 30 days,” Irma’s owner, Louis Galvan, tells ABC13.

To help keep them afloat during the shutdown, the unnamed patron decided to leave a whopping $1,900 in cash along with a $7,500 credit card gratuity on a $90.12 bill. They also scrawled a note on the receipt: “Hold tip to pay your guys over the next few weeks.”

Needless to say, the restaurant staff was floored by the tipster’s gracious gesture.

“I don’t even have words for it,” Irma’s assistant manager Janet Montez tells her local ABC outlet, admitting she wasn’t totally surprised because the customers — who are regulars at the joint despite their anonymity — have always been generous people.

“The gift we got today should help soften the blow,” says Galvan, who plans to divide the money among his 30 employees, giving them $300 each.

Despite the impromptu financial aid, the harried owner admits it may be a while before he can pay the staff’s regular wages.

“We’re not even worried about profitability at this point,” Galvan says. “We’re in survival mode.”

Irma’s is one of scores of US restaurants impacted by precautionary measures geared to slow the spread of the potentially deadly COVID-19 virus. Mayor Bill de Blasio announced late Sunday that NYC’s restaurants and bars would be shuttered starting Monday night, leaving eateries and staffers struggling to survive on a takeout-only basis.