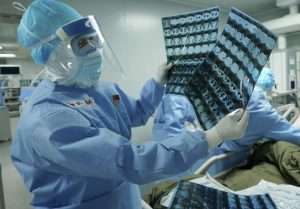 (NY DAILY NEWS) – Once at the forefront of the novel coronavirus pandemic, China has revealed for the first time since the outbreak began months ago that it has zero new domestic cases to report.

Officials with China’s National Health Commission during a news conference on Thursday announced eight new deaths connected to the illness. They also reported another 34 cases of the coronavirus in the last 24 hours, all of which were imported from abroad.

The new numbers could mean a huge turnaround for China, the first nation to implement strict travel and quarantine restrictions on millions in a bid to stop the coronavirus outbreak. It also marks the first time Europe has surpassed the number of Chinese cases, highlighting the outbreak’s shift to other nations, including Italy, where the stats continued to look grim this week.

The nation on Wednesday recorded its deadliest day since the virus was discovered in the Chinese city of Wuhan in December and then quickly spread to the rest of the world. A total of 475 people died from the coronavirus in a 24-hour time span, bringing the Italian death toll to just under 3,000.

Italian Prime Minister Giuseppe Conte on Thursday also announced the nationwide lock down set to end on March 25 will be extended until at least April 3. It includes a shutdown of most businesses and a ban on sporting events and other large gatherings.

States across America in recent days have also started implementing similar shutdowns and restrictions in a bid to curb the virus spread. In New York, Mayor Bill De Blasio and Gov. Andrew Cuomo continued to battle Wednesday over whether to quarantine the city while California mulled imposing martial law.

Just last month China was reporting thousands of new cases every day and considered one of the most high-risk nations in the world. Its leader, Xi Jinping, previously called for a “people’s war” against the virus spread while his government faced criticism for allegedly concealing the outbreak.

The coronaviurs has killed 3,245 people in China, which makes up more than a third of the global fatalities.

According to John’s Hopkins, the coronavirus has sickened more than 218,000 people worldwide, with more than 82,000 so far recovered. The global death toll on Thursday stood at 9,276.