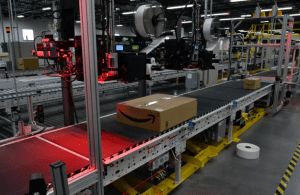 (CNET) – Amazon has reported its first confirmed COVID-19 case in its US warehouses, a network of facilities that has quickly turned into a critical need for millions of customers as they stay at home during the coronavirus crisis.

The worker was stationed at a site in a Queens, New York, a company spokesperson said in a statement Thursday morning. The location is a delivery station, which is much smaller than one of Amazon’s sprawling fulfillment centers. The site temporarily shut down for additional cleaning, and workers there were sent home with full pay, according to the spokesperson.

“We are supporting the individual who is now in quarantine. Since the early days of this situation, we have worked closely with local authorities to proactively respond, ensuring we continue to serve customers while taking care of our associates and we’re following all guidelines from local officials about the operations of our buildings,” the spokesperson said.

Some of that work includes increased cleaning in facilities, maintaining social distance in warehouses between workers and adding distance between drivers and customers during deliveries.

Amazon had previously reported confirmed coronavirus cases in its Seattle headquarters and in warehouses in Spain and Italy.

News of this first infection in a US warehouse could complicate Amazon’s already huge burden to ship mountains of packages to customers while stores are shut down and people are asked to stay home. If the virus were to spread in Amazon’s warehouse system, it could significantly hamper its ability to make deliveries. Amazon says it’s implementing many new health protocols to prevent that situation from happening.

The company this week announced plans to hire 100,000 new part-time and full-time workers in the US and raise wages in the US, Europe and Canada to help it respond to the spike in demand. It also said it will stop non-essential shipments from coming into its warehouses for now, so it can focus on bringing in and shipping medical supplies and household staples.

Amazon last week said it was expanding its sick leave policy, offering up to two weeks of pay for any Amazon employee diagnosed with COVID-19, the respiratory illness caused by the coronavirus, or placed in quarantine. This is in addition to Amazon’s offer for unlimited unpaid leave for all hourly employees through this month.

The company also created the Amazon Relief Fund with a $25 million initial contribution to help independent delivery businesses, gig workers who pick up work through the Amazon Flex delivery program and seasonal employees.

News of the Queens confirmed case was earlier reported by The Atlantic.