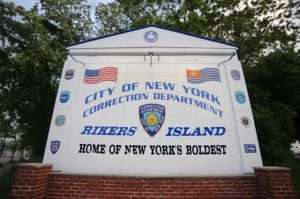 (NEW YORK POST) – The city is considering freeing jailed suspects over the coronavirus, Mayor Bill de Blasio said Tuesday — a move backed by the city Board of Correction and Manhattan and Brooklyn DAs.

City officials are “evaluating right now people who might be particularly high-risk in terms of vulnerability to the virus,” de Blasio said at an afternoon press conference.

The inmate group would presumably include the elderly and those suffering from diabetes, asthma, heart disease, lung disease and compromised immune systems — all identified as leaving people vulnerable to the virus.

Authorities would “evaluate those numbers, the details, and determine if, case by case, any of those individuals should be taken out of our jail system,” he said.

The city Board of Correction, which oversees the jails, said in a statement Tuesday that the Big Apple needs to follow the lead of Los Angeles and Ohio authorities who have already started to release inmates to try to prevent the spread of the deadly contagion.

“The City must begin this process now,” the BOC said. “The City’s jails have particular challenges to preventing disease transmissions on a normal day and even more so during a public health crisis.”

The board called on authorities to also consider anyone serving a sentence of a year or less.

A statement put out by a slew of district attorneys across the country — including Manhattan DA Cy Vance and Brooklyn DA Eric Gonzalez — echoed the push.

“If these facilities become breeding grounds for the coronavirus, it will not only impact those incarcerated, but our entire community,” the letter said.

The city Bar Association said it also backed the move.