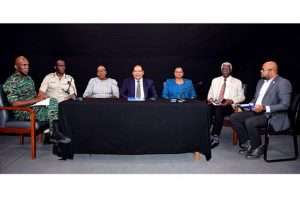 (GUYANA CHRONICLE) – FOLLOWING allegations that the three persons confirmed with corona/COVID-19 virus have been flouting voluntary self-quarantine guidelines, persons in Guyana suspected or confirmed as having the disease, will now face mandatory quarantining at Ministry of Public Health (MoPH) facilities.

The three confirmed cases have since been moved to one such quarantine facility. The country has four facilities. The four facilities have capacity to host up to 421 persons within three categories of risks, while the ministry will look at the possibility of expanding capacity should the need arise. “There is no more self-quarantine, all quarantine will now be done at the Ministry of Health facilities,” Minister of Public Health, Volda Lawrence, announced on Tuesday.

Minister Lawrence emphasised however that even as the ministry has an obligation to protect the health of the public and keep the public informed, it also has an obligation to protect the medical information of patients. Guyana’s first confirmed case of the corona virus was recorded on March 11, after the 52-year-old patient died. The three other confirmed cases thus far have all been persons related to the dead patient.
Minister Lawrence explained that the three categories under which persons will face quarantine include: probable cases, which speak to persons who have been tested for the virus, but the results were inconclusive; suspected cases, which are persons who have been exposed to persons confirmed with the virus; and confirmed cases, that is, persons who have tested positive for the virus.

Minister Lawrence also disclosed that the ministry is awaiting a shipment of corona virus testing kits, which is expected to arrive in the country in a few days, as the ministry continues to beef up measures to fight the spread of the virus which has been declared a pandemic by the World Health Organisation (WHO). “We have also sought to do monitoring of our stocks and supplies. We are working with suppliers to ensure that our purchases to deliver in Guyana, have that free access and flow to ensure we receive those supplies,” the minister said.

Lawrence was at the time speaking at a Ministerial Task Force press conference held at the National Communications Network. Minister Lawrence was joined at the head table by Prime Minister Moses Nagamootoo, who heads the Task Force, and a number of other heads of agencies involved in the country’s plan to combat the spread of the virus.
Also present was Minister of Education, Nicolette Henry; Commissioner of Police, Leslie James; Director General of the Civil Defence Commission, Kester Craig; and Director-General, Guyana Civil Aviation Authority (GCAA), Egbert Field.

Nagamootoo said that the country has been preparing for some time now for the possibility that the virus would come to local shores. “Our preparations to deal with this virus started in January of this year and a National Health Emergency Centre has been set up. We have moved from preparation to response. Since the confirmed reported case,” Nagamootoo said. He added that: “The president under provision of [the] Public Health Ordinance, ordered several agencies to implement a table of measures to contain the spread of the virus and save people from further exposure and infection.”

Field shared that the GCAA will be monitoring the two international airports, where cancellation of all international flights have been imposed effective as of midnight on Wednesday, March 18. At the MoE, Minister Henry noted that the National Grade Six Assessment (NGSA) and Caribbean Examiniations Council (CXC) examinations have been rescheduled; while for the CDC, Craig said the Commission MoPH in the execution of several measures.

“What is happening is, we have several things happening at the same time so we’re trying to ease some of the burdens of the MoPH. We are working to ensure if there are any challenges in the system we work to support the response,” Craig said.
He said the CDC is also working along with other agencies. “We’re looking at the implementation of the response and looking for weaknesses and working with agencies to strengthen weaknesses,” he said.

He noted that if there is need to increase the quarantine capacity, means of expansion will be looked into. “What we will be doing is continuous monitoring, so if we see that there is an influx we start looking at other locations and start preparing those locations for increase in cases,” Craig disclosed.

Craig explained that the CDC has also been working with helping to locate persons who have been on a flight that may have had an infected passenger, and playing a role in the continuous monitoring of those persons. “We have identified all the persons sitting close to that passenger and we’re checking on those persons’ temperature,” Craig noted.
Commissioner of Police Leslie James, who is also Chief Immigration Officer, noted that measures have been taken to safeguard immigration officers, equipping them with the necessary protective gears and materials. He noted that the force has also increased its monitoring of backtrack ports, and ranks of the Guyana Police Force (GPF) have been advised on cautionary measures to reduce the spread of the virus.