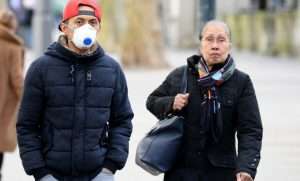 (NEW YORK POST) – “Stealth” coronavirus cases are fueling the pandemic, with a staggering 86% of people infected walking around undetected, a new study says.

Six of every seven cases – 86% — were not reported in China before travel restrictions were implemented, driving the spread of the virus, according to a study Monday in the journal Science.

“It’s the undocumented infections which are driving the spread of the outbreak,” said co-author Jeffrey Shaman of Columbia University Mailman School, according to GeekWire.

Using computer modeling, researchers tracked infections before and after the Chinese city of Wuhan’s travel ban.

The findings indicated that these undocumented infections with no or mild symptoms — known as “stealth” cases — were behind two-thirds of the reported patients.

“The majority of these infections are mild, with few symptoms at all,” Shaman said, Mercury News reported. “People may not recognize it. Or they think they have a cold.”

These “stealth” cases were then able to transmit the bug that could cause severe symptoms in other people, according to the researchers.

“It will continue to present a major challenge to the containment of this outbreak going forward,” Shaman said, adding that it underscores the importance of restrictions on movement in hard-hit regions.

COVID-19 has spread across the world to 182,400 people, causing at least 7,100 deaths, according to a tally from Johns Hopkins University.