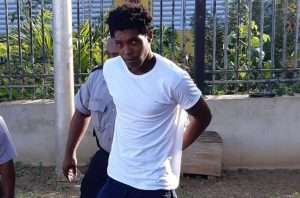 He had initially pleaded not guilty when he appeared before the court in December last year.

The court heard that on November 30, the accused man was near a food van when the complainant bumped into him.

There was an exchange of words, and a tussle ensued between them, the court heard.

They eventually ended the altercation and the accused headed to the Ghetto/Crabbe Lott area of Road Town.

It is alleged that sometime later, the two men met in the vicinity of the Sunday Morning Well, when the accused, who was allegedly armed with a knife, attacked the complainant.

It is further alleged that the complainant tried to defend himself against the alleged knife attack but sustained several cuts about his body in the process.

The complainant attempted to flee when he stumbled and fell to the ground. The accused man allegedly inflicted a final cut to his body before walking away.

The complainant was later taken to the Dr D Orlando Smith Hospital for medical attention.

The court further heard that the complainant sustained large cuts to the left side of his back, arm, shoulder, and abdomen.

He also received a laceration to his right wrist and had to undergo immediate surgery to prevent him from losing the said hand.

During a subsequent police investigation, closed-circuit television (CCTV) footage was extracted from the area of the incident, and the accused was arrested.

During the arrest, a knife was found on the accused, the court heard.

When an audio-video interview was conducted with the Jamaican, he denied the allegations.

However, it is reported that he later told investigators that he wanted to tell the truth about what happened, and a subsequent interview was conducted.

I was defending myself

The court heard that the accused man admitted to inflicting wounds on the complainant but said he did so in self-defence.

He reportedly claimed that when they met for the second time that night, he thought the complainant was about to attack him; hence, he pulled out his weapon and used it.

His sentencing is scheduled for March 31. Attorney Nick Saunders represents him.