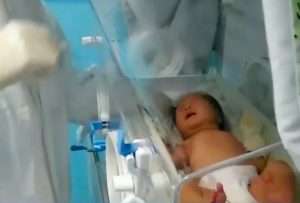 (MIRROR UK) – A baby has recovered without the assistance of medication after being born with coronavirus.

Xiao Xiao was delivered at Wuhan Children’s Hospital to a parent who had the deadly new Covid-19 strain of the disease.

The young girl was struggling with a respiratory infection and minor damage to her heart.

However, because her symptoms were not too severe doctors decided to let her recover without medication.

At just 17 days old, Xiao Xiao was given the all-clear having returned four negative tests for the disease.

“She did not have obvious difficulties in breathing, did not cough or have fevers, therefore we only gave her treatment for her myocardial condition,” Dr Zeng Lingkong, of the hospital’s Department of Neonatology, told state broadcaster CCTV.

He added: “She even grew bigger and fatter here.”

The happy recovery comes in the same month that a woman infected with coronavirus gave birth to a healthy baby girl in Xi’an.

The mum was later given the all clear.

As the global death toll for coronavirus nears 3,000 people, fears that it will spread across Europe are increasing.

Six people have died in Italy and the first two cases have been reported in Austria.

Schools across the UK have been forced to send pupils and staff amid fears of a coronavirus outbreak with some shutting altogether.

It comes after pupils took part in half term trips to northern Italy, where the high number of cases have led to 11 towns in Lombardy and the Veneto being put in lockdown.

Independent Cransley School in Northwich and nearby Nearby Brine Leas Academy in Northwich , Cheshire, are among those to shut their doors, after some students developed flu-like symptoms following ski trips to the region.

All pupils at Penair School in Truro , Cornwall, have been sent home after returning from a trip to Ponte di Legno.