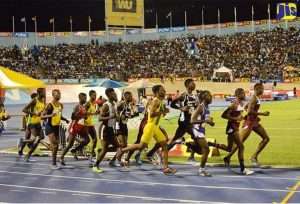 (JAMAICA OBSERVER) — The popular Boys’ and Girls’ Athletics Championships has been cancelled as a safety measure in light of COVID-19 hitting Jamaican shores.

This was revealed following a lengthy meeting involving the Government, title sponsor GraceKennedy, and the organisers of the event, the Inter-Secondary Schools Sports Association (ISSA).

This came a day after the Government issued a travel ban on schools to attend the Penn Relays in the United States of America.

This is the second time in 110 years that there won’t be any Champs since the inception in 1910.

The first time the Champs was cancelled was in 1944 due to World War II.