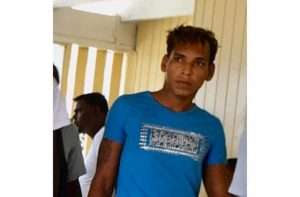 (GUYANA CHRONICLE) – AN Orealla resident was placed on $35,000 bail after he was found with six grams of cocaine.

Roberto Jabar, having been charged with possession of narcotics for the purpose of trafficking, appeared before His Worship, Alex Moore, at the Springland’s Magistrate Court on Tuesday.

The charge alleged that, on March 5, in Orealla Village, Corentyne River, Jabar was seen hiding the illicit drug in a chair at his home. He pleaded not guilty to the charge.

Prosecutor Orin Joseph had no objection to bail but told the court that Jabar’s wife observed him stuffing an item into the cushion of the chair.

She made a report to the Orealla Police Outpost and a search of the said chair by the police unearthed the drugs which weighed six grams. Jabar was arrested and told of the offence. The young man will return to court on May 21, for report.