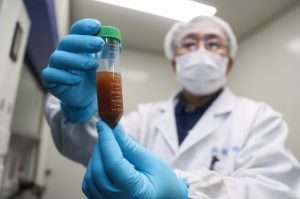 Eight institutes in the country are working on five approaches to inoculations in an effort to combat COVID-19, according to the South China Morning Post. The contagious illness has sickened more than 118,000 people and killed at least 4,200 worldwide, mostly in mainland China, as of Tuesday afternoon.

“According to our estimates, we are hopeful that in April some of the vaccines will enter clinical research or be of use in emergency situations,” Zheng Zhongwei, director of the National Health Commission’s Science and Technology Development Center, said Friday.

While it would take at least 12 to 18 months to ensure the vaccines are safe for the general public, under Chinese law, they can be deployed earlier for urgent use in a major public health emergency, as long as the benefits outweigh the risks.

Zheng waved off concerns about the safety of the vaccines, saying they were being developed in ­accordance with “scientific and standardized technical requirements,” The Australian reported.

In the US, Massachusetts-based biotechnology company Moderna Inc. shipped its vaccine to the National Institute of Allergy and Infectious Diseases for testing late last month. Initial results could be released by July or August.