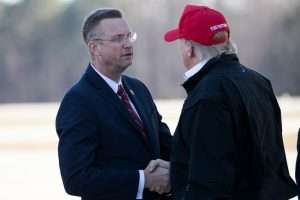 nypost.com – Two Republican congressmen say they were exposed to coronavirus — before having close contact with President Trump, including a handshake and a ride aboard Air Force One.

Rep. Doug Collins of Georgia, who shook Trump’s hand Friday at the Centers for Disease Control and Prevention in Atlanta, tweeted he was pictured at a conservative conference with a man who later tested positive for COVID-19.

Shortly after, Rep. Matt Gaetz of Florida announced that he also was exposed at the Conservative Political Action Conference, which ended Feb. 29.

Gaetz flew with Trump aboard Air Force One on Monday afternoon before revealing he interacted with the glad-handing CPAC guest.

Rep. Mark Meadows of North Carolina — who was recently named as Trump’s newest acting chief of staff — also announced he will self-quarantine at home after coming into contact with a person who tested positive. He too had attended CPAC.

“Out of an abundance of caution, Meadows received testing which came back negative,” his spokesperson, Ben Williamson, told The Hill. “While he’s experiencing zero symptoms, under doctors’ standard precautionary recommendations, he’ll remain at home until the 14-day period expires this Wednesday.”

Gaetz broke the news about his exposure on Twitter about an hour after the presidential plane landed at Joint Base Andrews in Maryland at 2:54 p.m.

“Congressman Gaetz was informed today that he came into contact with a CPAC attendee 11 days ago who tested positive for COVID-19,” Gaetz’s official account tweeted. “Congressman Gaetz had expected COVID-19 to impact Congress, given the elevated frequency of travel and human contact, and demonstrated his concern last week on the House Floor.”

Gaetz recently wore a gas mask in Congress to call attention to what he said was lawmakers’ unique vulnerability.

Gaetz’s office added: “While the Congressman is not experiencing symptoms, he received testing today and expects results soon. Under doctor’s usual precautionary recommendations, he’ll remain self-quarantined until the 14-day period expires this week. Our Washington office will be closed during this time, with our Pensacola office remaining open.”

Collins also said he was not experiencing symptoms.

White House spokesmen did not immediately respond to a request for comment on Trump’s brush with people exposed to the virus.

Press secretary Stephanie Grisham, however, tweeted Monday afternoon to deny a report that Trump feared journalists aboard Air Force One infecting him with the virus.

Collins and Gaetz join two other Republicans — Sen. Ted Cruz of Texas and Rep. Paul Gosar of Arizona — who say they are self-quarantined after exposure to the CPAC guest.

A fifth lawmaker — Democratic Rep. Julia Brownley of California — also announced she was exposed to the virus, but did not specify where.

Trump has sought to calm a panicked public and nosediving stock market by likening the respiratory bug to the annual flu. He brushed off any concerns as the virus crept closer to the White House.

“I’m not concerned at all,” the president said Saturday, after news broke of the infected CPAC attendee.

CPAC ended Feb. 29 and was followed by an annual pro-Israel conference that ended March 3 — two attendees at which later tested positive in New York for the virus.

The White House is taking few measures to protect against the virus, which has infected more than 100,000 people globally and killed more than 3,000. As of Friday, steps included new hand sanitation stations and a requirement that some visitors disclose recent travel abroad.