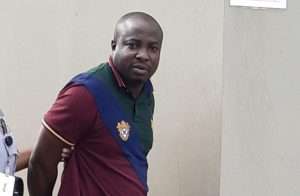 (BVI NEWS) – An African man was slapped with two charges after he allegedly attempted to smuggle $23,241 through the TB Lettsome International Airport by stashing the cash in his luggage and shoe.

Charged with failing to declare monies and smuggling is 35-year-old Chelsea Mutyaba of Uganda in East Africa.

He pleaded guilty to failing to declare monies to Customs when he appeared before Senior Magistrate Tamia Richards on Tuesday.

Mutyaba is scheduled to return to court on March 11 to answer to the charge of smuggling was because that complaint was not clearly articulated on the court’s document, BVI News understands.

The court heard that last Thursday, the accused man was attempting to leave the Beef Island-based airport after spending a few days in the British Virgin Islands.

He further explained that he intended to establish a business and rent a house but it was too expensive, the court also heard.

While he was being screened at the airport, $13,001 was found concealed in the left side of an Adidas sneaker. The cash was bound by a rubber band in predominantly of $20 bills.

Another sum of cash was found in the pocket of a pair of jogger’s pants in his suitcase, also bound with rubber bands and totalled $10,240.

The accused was transported to the Road Town Police Station, and the cash was counted and photographed.

During a cautioned interview, the accused man indicated that he resides in Uganda but travelled to Tortola from Grenada.

He said he intended to return to Grenada via LIAT when he was intercepted by Customs.

He said he was an accountant and works for a construction company.

When questioned about the origin of the money, he explained that he inherited a piece of land from his father which he sold for the equivalent of US $18,000.

According to the accused, he arrived with $25,000, and he identified the purpose of his visit as vacation but intended to scout for a viable business venture.

He claimed that he used some of the money to pay for his accommodation and food.

The accused Ugandan said he was aware that he was supposed to declare the funds but decided to conceal it to avoid the police.

The accused was unrepresented and is expected to return to court on Wednesday.