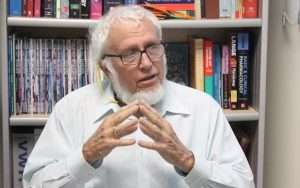 (BARBADOS TODAY) – The effort to develop a lucrative medical cannabis industry got a further boost Thursday as the University of the West Indies at Cave Hill launched a course to help medical professionals deal directly with medical cannabis products.

The university has developed a Medicinal Cannabis Master Rounds course, which is to be offered from March 12 to 15 at the Sagicor Cave Hill School of Business and Management for nurses, physicians and pharmacists.

UWI officials told Barbados TODAY that while the response to the annual course has been slow, they were expecting a last-minute spike in registrations, which they said can be paid for on the start date.

Chairman of the Cave Hill campus steering committee on medical cannabis, Professor Dr Wayne Hunte, said he was excited, adding that it was conceptualized over a year ago and has gone through a rigorous and extensive review process including the medical and nursing councils.

“The University of the West Indies is taking very seriously, its commitment to help the Government of Barbados with the development of the cannabis industry,” said Professor Hunte.

He said the university believed the growth of the cannabis industry “is only going to be a successful and sustainable patient centred industry if it is grounded in hard-core science-based, evidence-based approaches”.

UWI said it expects to play a significant role in training and research and development in the fledgling industry.

Professor Hunte explained that the six-member steering committee will carry out extensive research on the strain of marijuana that would be best suited for the local market and the best condition for growth, among other areas.

He said: “The longer-term goal of that is to see whether we can produce a strain that is basically a top Barbados strain that would be appreciated by the visitors and locals who use cannabis medication, but also that becomes a niche market you could market and export.”

The renowned biologist said while there seemed to be a level of restlessness or impatience on the part of residents who believed Government was moving too slowly with the roll out of the medical cannabis industry, it required patience because it was a “complicated” industry that had to be developed carefully.

“The patience being exhibited in Barbados trying to get this right and avoid certain mistakes that other countries have made is not an excuse for tardiness, but it is a rational for thoroughness,” he said, adding that officials were making sure that when it was rolled out it would come with “as few errors as possible”.

Dr Damian Cohall, Senior Lecturer in Pharmacology and Deputy Dean of the Faculty of Medicine told Barbados TODAY the course had four main objectives – to explain the pharmacology of cannabis derivatives and cannabis based medicines, focusing on synthetic and natural cannabinoid therapy; to provide a basic level of competence and confidence in the prescription of cannabis based products; to provide understanding of the legislation for developing and operating a medicinal cannabis industry; and to help foster a network of regional healthcare providers and clinicians.

“It is our hope that we will be able to attract health care providers from neighbouring CARICOM territories, which have reformed their legislative framework to allow for the actual prescribing of medical cannabis to patients,” said Dr Cohall.

Dr Cohall said the university intends to develop more courses and include other professionals and individuals who would also be associated with the medical cannabis industry.

He pledged the university’s continued support for regional governments as they develop the industry, saying the tertiary level education institution would help through research and development, training, the development of standards and quality assurance, and public awareness.

Dr Cohall said the university would also be working closely with “strategic partners” to help Barbados develop high standards for production, extraction and packaging, and help the country avoid mistakes other countries with a medical cannabis industry made when they started out.

As he put forward some recommendations to authorities, Cohall said be believed the best way to roll out the industry was to ensure it was “patient-centric”.

“It should be patient-centric – the needs of persons who can benefit from this medicine has to be considered as a priority. Then all the other associated benefits of the industry can be considered including economic,” he said.

He also recommended that training and certification and research and development remained key tenets of the industry.

He suggested officials should look at the potential development of geographical indicators and intellectual property as it relates to extraction methods and new medicines.

Dr Cohall further pointed to the need to eradicate some of the high costs associated with the industry and ensure regulation is in place to govern the industry from the point of cultivation to dispensing and administration of medical cannabis products.