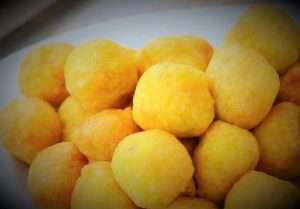 (TRINIDAD EXPRESS) – A seven-year-old boy is suspected to have choked and died while eating a pholourie.

A police report said that around 3.15 p.m. Shazard’s mother was at the school’s compound to pick him up.

Police were told that his mother purchased a bag of pholourie, and gave one to him.

Little Shazard was eating one of the pholourie when he showed signs of choking.

Police were told that his mother tried to save him, but he collapsed and became unresponsive.

An ambulance took him to the Siparia District Health Facility.

Doctors were unable to save him and he was pronounced dead around 4.32 p.m.

Officers of the Penal Police Station met the boy’s mother and father at the health facility.

The officers said the parents were distraught over the loss of their son.

An autopsy is expected to be done on Tuesday at the San Fernando mortuary.