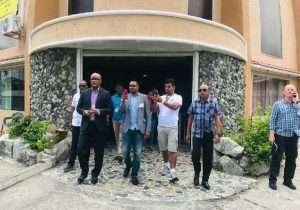 (TRINIDAD EXPRESS) – Guyana is in turmoil over the general election results, with former president Bharrat Jagdeo accusing the ruling Government of attempting to stage a coup and steal the election.

Guyanese voted on Monday for a new government but up to yesterday no winner had been declared as the process has been marred by controversy.

The results of one particular area—District 4—which has the largest block of voters in the election, is at the centre of the issue.

At the Guyana Elections Commission (GECOM) command centre at Hadfield Street, Guyana, tensions were high yesterday and riot police were called in to quell disturbances inside and outside the building.

The Guyanese political landscape is riven by ethnic divisions. The ruling Partnership for National Unity and Alliance for Change (ANPU-AFC) is supported in the majority by the Afro-Guyanese community led by President David Granger, a 74-year-old retired army general.

The opposition People’s Progressive Party/Civic (PPP/C), which is mostly supported by Indo-Guyanese, is led by Bharrat Jagdeo, a former president of the country.

By yesterday the results of the national and regional elections were declared in nine of Guyana’s 10 districts. District 4 was the only undeclared area.

The Express learnt that there was drama over the move by the returning officer for District 4 to not follow the process and verify the numbers before any results are declared.

The injunction restrained the Guyana Elections Commission (GECOM) from declaring results in District 4 until a verification process is completed of all the tallies —there must be compliance with Section 84 of the Representation of the People Act under Guyana’s electoral laws.

Speaking to the media in Georgetown yesterday, Nandlall said the shouts of “no” coming from inside the building was the reaction to the returning officer attempting to read a declaration.

He said the declaration is made after a tabulation of the Statement of Polls (SOPs) which was not done and this is in contravention of the law.

Despite this, there was a dramatic development when GECOM released to the media results for District 4 in the general and regional elections and if certified it would see the Granger’s’ team winning the general elections.

“This is thievery we have to be prepared to take action whatever it takes we are going to fight,” Jagdeo said following the results.

He said the PPP/C has requested a recount and the international community is aware of the discrepancies of what is happening.

“This is totally fake, these are not the real results,” said Jagdeo adding that there must be the SOPs to verify the data.

“There is a cabal at GECOM that is involved. This is an attempt to hijack the process They could have done this verification in four hours and they have delayed for three days now and they are doing it with the complicity of many of the staff at GECOM. This goes beyond normal now. This is attempt to stage a coup d’etat…results have not been verified for District 4 and they cannot be declared. That is what they just tried do here. Had we not had people here, they would have succeeded,” he said.

“We heard there are secret plans to swear him (David Granger) in as President. They are not going to succeed, because once they do, the entire international community will come down on them. Guyana will be sanctioned… all of them. We will see personal sanctions because of attempts to tamper with the results of the elections. This is a stealing of the elections in the presence of international observers…I am sure that they are in touch with their government. So now the entire world is seeing this,” he said.

The former president said there would be sanctions against the government or any APNU/AFC member for participating in any suspicious exercise by the international community.

PPP/C Presidential candidate Dr Irfaan Ali said it was clear that from all the numbers the PPP/C won the election “convincingly”.

He said it was a “sad day” for Guyana as the election was “hijacked” and the people are the ones who will suffer.

PPP/C prime ministerial candidate Mark Phillip said, “This is the darkest day for democracy in Guyana because the process was deliberately derailed.”

He accused the Opposition of engaging in “propaganda” as he emphasised that GECOM is an independent institution.

“GECOM is one of the truly independent institutions in Guyana under our Constitution they have the right to regulate the sworn procedure,” he said.

He said further that GECOM has authority to “move away from legislation” and “bend the rules” to ensure the election is free and fair.

“So they bend the rules and changed it up in order to produce free and fair elections,” he said.

Williams said that the party did “very well” in securing votes in Guyana’s East coast despite the “Charrandass treachery”.