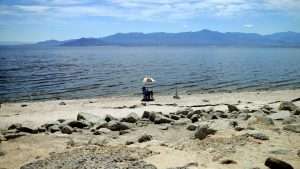 (AP) — Scientists say that half of the world’s sandy beaches could disappear by the end of the century if climate change continues unchecked.

Researchers at the European Union’s Joint Research Centre in Ispra, Italy, used satellite images to track the way beaches have changed over the past 30 years and simulated how global warming might affect them in the future.

“What we find is that by the end of the century around half of the beaches in the world will experience erosion that is more than 100 metres,” said Michalis Vousdoukas. “It’s likely that they will be lost.”

The study, published Monday in the journal Nature Climate Change, found that the extent to which beaches are at risk depends on how much average global temperatures increase by the year 2100. Greater temperature increases mean more sea level rise and more violent storms in some regions, causing more beaches to vanish beneath the waves.

“The projected shoreline changes will substantially impact the shape of the world’s coastline,” more than a third of which is sandy beach, the authors wrote.

Beaches are valuable for recreation, tourism, and wildlife, while also providing a natural barrier that protects coastal communities from waves and storms.

Many coastal areas, including beaches, are already heavily affected by human activity such as seashore construction and inland dams, which reduce the amount of silt flowing into oceans that’s crucial for beach recovery.