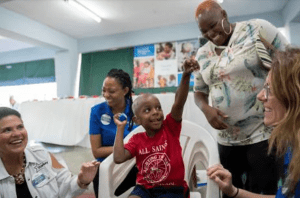 (JAMAICA GLEANER) – Having blamed herself for his disability since his birth, 45-year-old Suzette Morais broke down in tears yesterday when her three-year-old son heard clearly for the first time.

Morais believes her son, Clayon Elvin Jr, was born with limited hearing because of the stress-inducing tragedy she battled while pregnant with him.

In 2015, three of her six children at the time were burnt to death when her mentally ill brother set on fire their home in Hopeful Village, St Andrew.

However, with the help of the Starkey Hearing Foundation and its annual mission, Clayon was gifted with a hearing aid that sent him and patrons at the Chinese Benevolent Association auditorium into excitement when he heard clearly for the first time.

The elated three-year-old started dancing to the music being played by one of Starkey’s volunteers.

“I feel so overwhelmed now ­seeing him hear so properly for the first time. I feel so happy,” Morais said.

“Normally, you have to pitch your voice or you have to touch him, but he normally uses his other senses because he is really smart.”

The now-overjoyed mother said she was hopeful that her son’s new-found talent would help her cope with the death of her children five years ago.

Her nine-year-old daughter Abigail Reid, 15-year-old son Leonardo Morris, and 18-year-old son Bebeto Harris perished as they slept when the house was doused with gas and set ablaze.

Courtney Smith Sr said that his son, who was born with minimal hearing, had long been described as a slow learner. Now, he expects things to change for Courtney Jr.

“I have five kids and he is the only one who was born with a hearing problem. He used to go a regular school, but we had to stop him and send him to a special school for the deaf because he was way back in the class.

“This is his second year at Lister Mair-Gilby High School and he is now learning sign language and stuff and now he can get to ­communicate more,” Smith Sr said.

He further went on to say he was thankful that the foundation had given his only son the ability to hear clearly and that he might possibly be transferred to a regular high school.