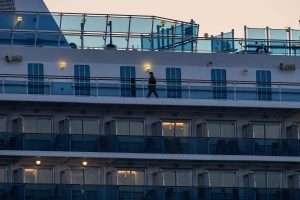 CNN- A woman working as a tour bus guide in Japan has tested positive for the coronavirus for a second time, Osaka’s prefecture government said on Wednesday.

The first case of reinfection to be reported in the country comes amid mounting fears over the spread of coronavirus there. The number of confirmed cases in Japan has risen to more than 800 — nearly 700 of which were reported on a cruise liner quarantined off Tokyo earlier this month — and seven people have died.

The 40-year-old woman, an Osaka resident, tested positive on Wednesday after developing chest pains and a sore throat, the prefectural government said in a statement. She first tested positive in late January and was discharged from hospital on February 1, after being treated for symptoms at a hospital in Osaka.

The Japanese Ministry of Health guidelines state that coronavirus patients must get tested twice before their release.

The woman had contact with tourists from Wuhan while working as a tour guide in mid-January. An Osaka prefectural official told CNN that she did not attend work, wore a mask at all times and did not have close contact with anyone while she was not in a medical facility.