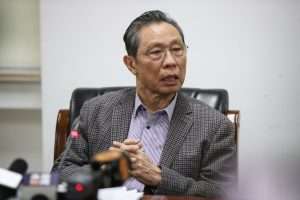 CNN- A top Chinese respiratory expert says he is confident “the epidemic (will) be basically under control at the end of April.”

Speaking a news conference on Thursday, Zhong Nanshan, the director of China’s National Clinical Research Center for Respiratory Disease, said he had so far reasonably accurately projected the course of the virus.

“We previously predicted that the peak should be in mid or late February, it turned out the number of new cases began to drop after February 15. We predicted the number would be 60-70 thousand, and now it is 78-79 thousand in China,” he said.

The Chinese expert said that his original global projections regarding the outbreak had needed to change due to the increased cases outside of China.

New job for Zhong: iPhone maker Foxconn announced this week that it had appointed Zhong as a chief consultant to the company as it continues to resume operations at facilities throughout China.

Zhong is seen as one of the heroes in China’s battle against severe acute respiratory syndrome (SARS) in 2003, and is also currently leading the country’s national research team on the novel coronavirus outbreak.