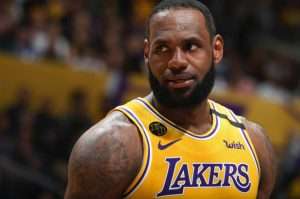 nypost.com- An “emotional” LeBron James declined to answer whether he attended the memorial for Kobe and Gianna Bryant at the Staples Center Monday.

James, who continues to grieve the passing of one of his idols and friends, was not seen on camera at the 2.5-hour event — leaving viewers to speculate on his presence — and passed on responding to a point-blank question asking if he was there, USA Today reported.

“I respect your question for sure, but it’s very emotional,” James said Tuesday. “A very emotional day. A very tough day for myself, for my family, for everyone involved.”

Tens of thousands of Bryant fans packed the arena for what was billed as the “celebration of life” where celebrities, athletes and Bryant’s widow, Vanessa, spoke on Kobe’s and Gianna’s legacies after the two were killed in a tragic helicopter crash last month.

“One thing I can come out of it saying is how strong and how bold and how powerful Vanessa is,” James added. “To stand up there the way she did, to give that speech the way she gave that speech. I commend her.”

Hours before Bryant’s death, James had passed him on the NBA’s all-time scoring list. James has said he admired the Laker legend growing up and left for the league out of high school — just as Kobe did — in hopes to follow a similar career.

“My heart is with their family still,” James said. “With his three daughters that are still here. With his wife. With his mom and dad and his sisters. It was just a very difficult day. Obviously, it was a celebration but it was a difficult day for all of us.”

James said he likely would never be able to find closure in Bryant’s death.

“It’s never going to be a closure,” he went on. “We continue to live on his legacy and continue to have our hearts heavy with both sadness and with happiness for his family that are still here. So, it’s not a closure. But it was a celebration which was well-received from not only the Laker faithful, not only the family here, but everybody around the world.”