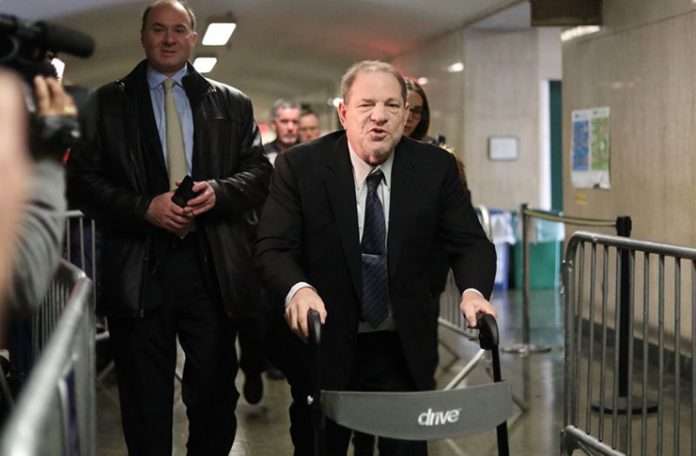 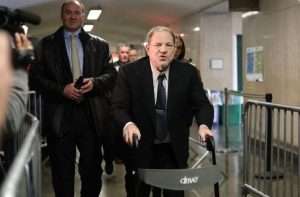 The jury’s verdict, in the fifth day of intense deliberations, came barely a month past the Jan. 22 opening arguments in the Lower Manhattan courthouse.

The decision followed a tumultuous week where the jury of seven men and five women asked Judge James Burke if they could deliver a divided verdict in the extraordinarily high-profile prosecution of the exceptionally well-known defendant. The panel indicated in a Friday note that they were hung up on the top counts of predatory sexual assault, a charge that carried a possible life sentence for Weinstein.

The 67-year-old disgraced defendant, who opted not to testify in his own defense, heard the verdict along with his high-powered defense team inside the jam-packed courtroom.

The Oscar-winning producer of “Shakespeare in Love” was accused in the last three years by some 90 women with sexual misconduct ranging in tenor from insensitive to indictable across the decades. Weinstein, who still faces criminal charges in California, has maintained that all the sexual encounters were consensual.
His trial marked the highest-profile #MeToo prosecution since comedian Bill Cosby’s April 2018 sexual assault conviction.

Manhattan prosecutors accused Weinstein of raping aspiring actress Jessica Mann in 2013 and sexually assaulting his former production assistant Miriam Haley in 2006, with both women taking the stand to testify against him. Four other accusers, including Emmy-nominated actress Annabella Sciorra of “The Sopranos,” testified in excruciating detail about their unwanted sexual encounters with Weinstein as prosecutors presented the jury with evidence of an alleged pattern of horrific behavior.

Actress Rosie Perez recounted how a terrified Sciorra, after telling her that she was raped by the filmmaker, explained why she didn’t go to the police: The powerful Weinstein, a friend of President Clinton and his wife Hillary, would “destroy me.”

Weinstein’s defense team called just seven witnesses inside the 15th floor courtroom, while prosecutors summoned 28 people to testify — with their case anchored by the emotional accounts delivered through tears and sobs by the half-dozen accusers.

The witnesses wept as they conjured up gut-wrenching memories for the jury, with Sciorra describing in detail the winter’s night in 1993-94 when the hulking Weinstein burst into her Manhattan apartment and allegedly raped the 110-pound actress.

“He kept coming at me,” said Sciorra, the first Weinstein accuser to testify against him at a criminal trial. “I felt overpowered because he was very big. … I was just trying to get away from him and he put my hands over my head to hold me back, and he got on top of me and he raped me.”

Mann, who spent three days on the witness stand, told jurors how the disgraced Hollywood mogul raped her inside his room at The DoubleTree Hotel in Manhattan’s Midtown East on March 18, 2013.

Mann said that after trapping her inside his room, Weinstein instructed her “like a drill sergeant” to get undressed before forcefully raping her. After the assault, she discovered a just-used needle inside a bathroom trash can — left there by Weinstein, who injected himself with an unknown drug to get an erection.

Mann, a Washington state native and one-time evangelical Christian, also accused the “Pulp Fiction” producer of raping her a second time at The Pensinsula Hotel in Beverly Hills in November 2013.

Mann was aggressively cross-examined during her three days on the stand, describing her volatile relationship with the once larger-than-life producer. She described a complex relationship that included sexual encounters that were non-consensual, consensual and often forced or coerced.

Haley, a Swedish citizen who worked briefly off-the-books as a production assistant on the set of “Project Runway,” testified that Weinstein lured her to his SoHo loft in summer 2006. He proceeded to pin her to a bed and perform forcible oral sex.

“I started realizing what was actually happening: I’m being raped,’” Haley testified. “He held me down on the bed and he forced himself on me orally. I was on my period. I had a tampon in there, I was mortified.”

Defense attorneys used friendly emails Haley had sent to Weinstein after the alleged rape to discredit her testimony, and noted that she flew to Los Angeles on his dime just a few days later.

The trial began more than two years after allegations of sexual misconduct were first published about Weinstein in The New York Times and The New Yorker in October 2017.

Weinstein still faces felony charges in California for forcible rape, forcible oral copulation, sexual penetration by use of force and sexual battery by restraint stemming from a pair of 2013 incidents.