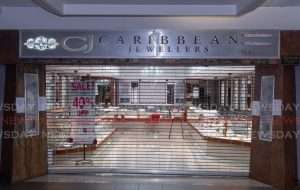 newsday.co.tt- Three people, including a Caribbean Jewellers employee, are said to have been detained in connection with the investigation into a daring $2.5 million heist on Monday, at the jewellery store in Lowlands Mall, Tobago.

This, after gunmen dressed in Muslim wear entered the jewellery store around 12.39pm, held up the workers and robbed them of jewellery. The robbery took place without much alarm as employees of nearby stores were unaware of what transpired until after.

The bandits reportedly sped off in a gold Almera car, in which two form two female students from a secondary school were occupants.

The students, from Bagatelle and Golden Lane, are being treated at hospital for gunshot wounds after police had a shootout with the bandits. The bandits eventually crashed into a utility pole along Union Road.

The student from Bagatelle, who was shot in the head, was the only person found in the vehicle. She was taken to the Scarborough General Hospital and then transferred to the Eric Williams Medical Science Complex, Mt Hope, in Trinidad. She is said to be in a serious but stable condition.

The other student is still being treated for a gunshot wound to her hand after she went to the hospital afterwards.

On Monday, two men from Golden Lane and Pump Mill were held in connection with the robbery.

The driver of the getaway car is said to have escaped and is still at large. He is also believed to be injured. Investigations are continuing.