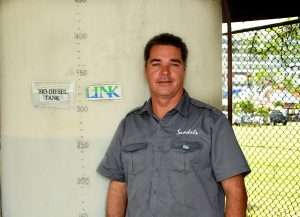 PR- Following the success of its first Biodiesel Conversion Centre in St. Lucia, Sandals Resorts International is exploring ways to expand the project throughout its resorts across the region.

For the last five years, the company’s Dive Centre at Pointe Seraphine has been the site of its first biodiesel plant, successfully converting waste vegetable oil from the kitchens at the company’s three resorts on the island into biodiesel fuel for use in marine vessels. Initiated as a pilot project in keeping with the company’s commitment to sustainable environmental practices, the project first started in 2015 by Maurice Moss, former Marine Boat Maintenance Manager at the Dive Center, who built the first conversion processor from “bits and pieces” he collected from all three resorts.

Since July 2018 however, the plant, which has since been upgraded, has been managed by Quentin Landman, who currently holds Moss’ former post while the actual fuel conversion is handled by the company’s Biodiesel Technician, Sammy Hillman.

Biodiesel is a clean burning alternative to petroleum diesel and is derived from new or waste vegetable oil. It is made by reacting fatty acids with a base in the presence of an alcohol, typically methanol, and a catalyst. The two most common bases are sodium hydroxide (NAOH) or potassium hydroxide (KOH). According to the U.S. Department of Energy & Agriculture using biodiesel in place of petroleum diesel will reduce the emission of total unburned hydrocarbon by 60 per cent, carbon monoxide by 48 per cent, and particulate matter by 47 per cent and will see a 100 per cent reduction in sulphates. Research has also shown that biodiesel is the first fuel to have fully completed the health effects testing of the U.S. Clean Air Act with results revealing that biodiesel poses no health threats and reduces the compounds linked to cancer by 80-90 per cent.

According to Landman, the plant produces approximately 320 gallons of biodiesel per month and this is used to fuel the company’s four 16 tonne dive boats as well as his own company-issued van. He added, “We manufacture about 80 gallons over six days and our engines drink diesel at rates of 25 gallons an hour. What we save at the pump is about 90 cents per litre of diesel. We do get worthwhile savings.”

Landman explained that the use of biodiesel saves the company approximately XCD $1361.26 per month in fuel costs which translates to XCD $16,335.12 a year. He added, “Using the biodiesel fuel cuts our monthly diesel budget by 10 per cent. For a small project, those are commendable results.”

Although the company’s vessels are not fully run on biodiesel fuel and are instead powered by a mix of biodiesel and petroleum diesel, Landman says that the environmental benefits and the savings are no less remarkable. “We add about 35 to 45 per cent biodiesel to the vessels’ diesel and we do this because there are settings in the vehicles’ engine control unit that would need to be changed to allow them to run entirely on biodiesel and we’ve not done that yet. We’ve found that a mix is best and I’ve used in on my own vehicle with no ill effects”, he said. Landman added that mixing biodiesel and petroleum diesel maintains similar horsepower and fuel economy.

To create biodiesel, waste vegetable oil from the resorts’ kitchens is taken to the Dive Centre where it is strained to remove food remnants. From there, the oil is left to settle for several days before the clean surface oil is pumped into storage containers. The oil is thereafter pumped into a processor and heated to remove excess water. An acidity test or titration is done to determine the free fatty acid content as a measure of the quantities of chemicals needed to initiate the conversion process. The reaction of the base and the methanol produces methoxide, which is slowly introduced into the oil and mixed for several hours. The product of the reaction is then transferred to a settling tank where chemical separation takes place and the biodiesel is formed. The newly formed biodiesel is further transferred to wash tanks or “dry wash” columns where it goes through a series of “washes” to remove residual chemicals. From there, the biodiesel is dried by heating and circulation to extract excess water and then pumped through a filter for immediate use or for storage.

Landman also revealed that residual product from the conversion process, also known as glycerol is  beneficial and when subjected to one more chemical process can be transformed into liquid soap for use in the kitchen or to wash marine vessels.

Sandals Resorts International’s Deputy Chairman, Adam Stewart expressed pride at the accomplishments of the team. “The work that this team has been doing is nothing short of remarkable. It not only speaks to our commitment to the environment and to reducing our carbon footprint but it also highlights the talent and expertise of our team members who have committed to this project and have reaped commendable results. All the work is being done in house by our team and that alone is incredibly significant.”

Stewart added that additional research and testing would continue in St. Lucia with a view to replicating the work of the Conversion Centre in all islands where Sandals and Beaches operate.