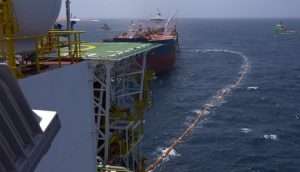 The process, which is being monitored by the Guyana Revenue Authority (GRA) and the Guyana National Bureau of Standards (GNBS), was witnessed by Director of the Department of Energy Dr Mark Bynoe and other officials, according to a statement from the Ministry of the Presidency.

According to the statement, Dr Bynoe disclosed that Guyana is entitled to approximately five million barrels of oil in 2020 alone, plus the two per cent royalty and withholding taxes.

In an effort to defend the Production Sharing Agreement (PSA) signed with ExxonMobil and its partners which came in for serious flak in recent months, the Director said there will also be direct and indirect benefits through employment creation and other revenue-generated income.

The crude is being transferred onto the oil tanker Cap Philippe, which was chartered by Shell Western Supply and Trading Limited.

The Government of Guyana in December selected Shell Western Supply and Trading Limited of the Royal Dutch Shell group of companies to buy the country’s first three lifts of oil.

While on the vessel, Dr Bynoe explained that the lifts are part of Guyana’s profit oil allocation and do not include the two per cent royalty, which would be paid on gross productions.

“So, even though we are having a million barrels lift in this particular instance, we are also receiving two per cent on all oil that is being produced. This gets us away from the perception that all Guyana is getting under the contract is two per cent royalty,” he said.

Dr Bynoe noted that the offloading takes between 20 to 36 hours and the process is expected to be completed on Wednesday.

He added that the required officials from GRA and GNBS are on board to ensure the integrity of the investment is protected as well as to ensure and provide, the level of comfort to Guyanese that the requisite systems are in place to protect Guyana’s interests.

“What has also been happening is that the GNBS has been working assiduously to tag specific meters that are critical in terms of measurement. They have also been working with the operators on the FPSO with regards to calibration so that the measurements that we are getting are precise as far as practically possible, and those tags are to protect the integrity of the system,” Dr. Bynoe explained.

According to the statement, the GNBS is able to ascertain that the system is not tampered with and that Guyana is getting its fair share before every lift.

With regard to pricing, the Ministry said the sale of the first three cargoes has been concluded on a Dated Brent price basis, which reflects the tradable, spot market value of crude oil.

The Department of Energy has also indicated that it will be launching a Request for Proposal (RFP) shortly to recruit a marketing firm, on a term basis, to assist the Department in selling Guyana’s future crude entitlement.