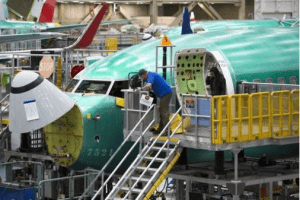 Due to the halt in service, the company has stopped delivering the jets and temporarily ceased production.

After repeatedly missing its goals for resuming flights last year, Boeing has targeted a mid-2020 return for the plane.

“That finding led to a robust internal investigation and immediate corrective actions in our production system.”

A message to staff from vice president Mark Jenks said debris was found in several planes in storage.

No further details were given about the debris material, which Bloomberg News said could have been tools or rags left by workers.

About 400 aircraft must now be inspected.

The 737 MAX has been grounded since March 2019 following two crashes that claimed 346 lives.