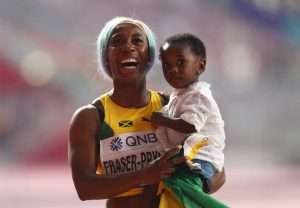 (jamaicaobserver.com) — Jamaican sprint queen Shelly-Ann Fraser-Pryce, currently preparing for the Tokyo Olympics, says the defence of her women’s 100m sprint gold at the 2021 World Championships could be her farewell from athletics.

The 33-year-old surged to an unprecedented fourth women’s 100m gold at the Worlds in Doha in September, on her return to major competition after the birth of her son Zyon in 2017.

“After Tokyo I am the defending champion at the World Championships in Eugene, and that is so close to home,” Fraser-Pryce, who has won two Olympic and nine World Championships gold medals over the last 12 years, said ahead of yesterday’s Laureus World Sports Awards in Berlin.

“It’s a few hours [flight] from Jamaica and to be able to end a career close to home where I can have most, if not all, of my family in attendance would be the highlight of my career.

“I am taking it a year at a time. After Tokyo, I can make that decision.”

At a media event before yesterday’s award, US athletics legend Michael Johnson said he would “put money” on the evergreen Fraser-Pryce winning the women’s 100m final on August 1 at the Tokyo Olympics.

Having won Olympic gold medals in the women’s 100m final at the 2008 Beijing and 2012 London games, Fraser-Pryce is bidding to complete the hat-trick in Tokyo after having to settle for bronze in the sprint event at Rio de Janeiro in 2016.

“I’m feeling good. The last two years have been an amazing journey for me and added to my motivation in getting me ready for Tokyo,” she said in Berlin, with one eye on the looming Olympics which begin on July 24.

She will be 34 by the time the USA hosts the next World Championships at Eugene, Oregon, in August 2021, an event she has pencilled in to potentially bring down the curtain on her illustrious career.