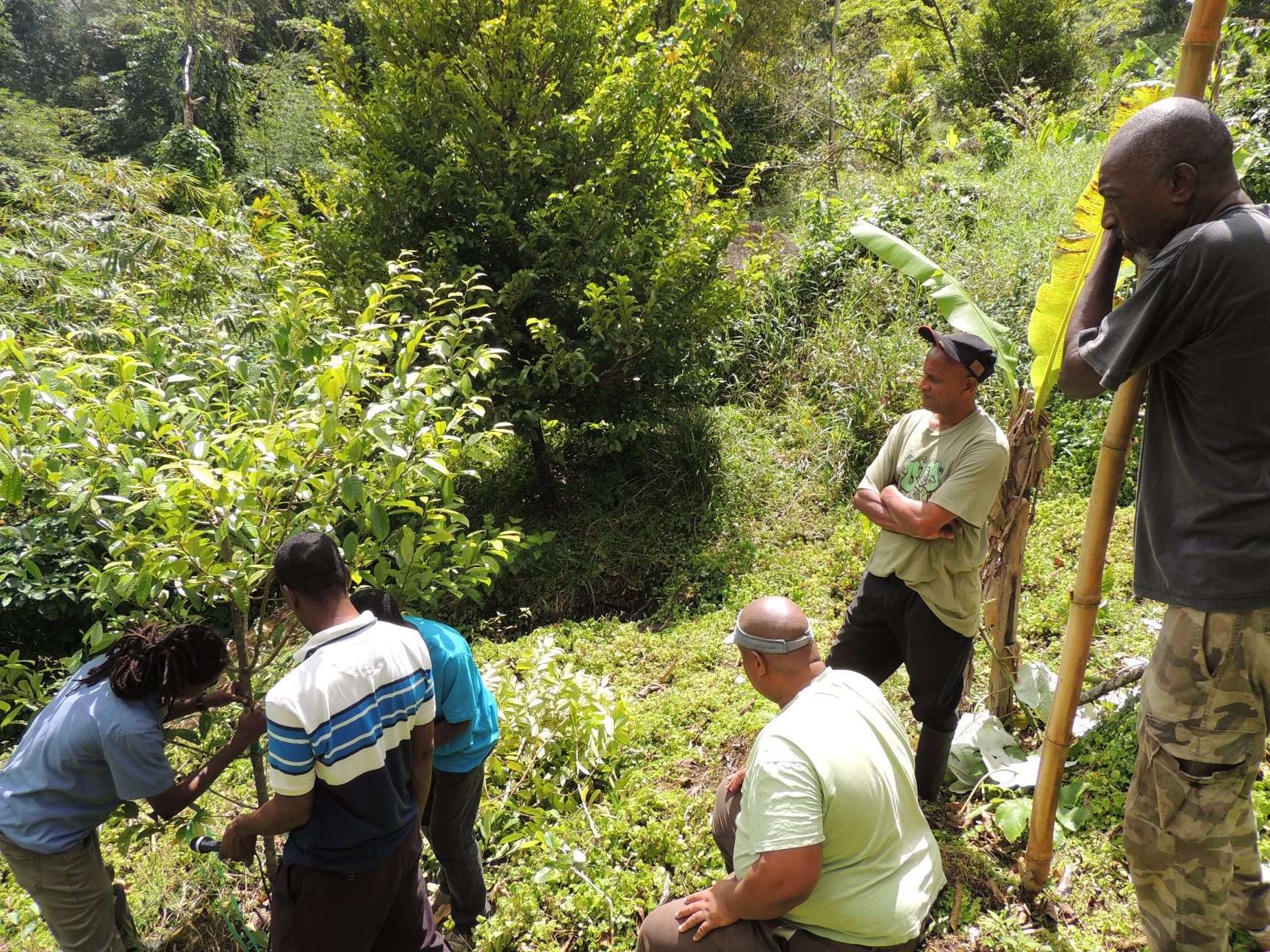 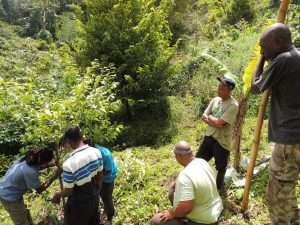 Nutmeg trees are generally dioecious plants (either male or female reproductive parts) and after propagation by seeds, approximately 50% of the plantings are usually male. The sex of each plant can only be known at the time of flowering, which is usually when they are five to seven years old.

Once the plant declares to be a male, farmers in Grenada normally destroy the tree. The method of grafting is recommended to convert the male plant into a productive tree.

This is the practice that was implemented at the farm of Mr. Ambrose Phillip, who experienced the unfortunate occurrence of more than 80% of his plantings being male.

On Tuesday, February 11, 2019, a team which comprised of representatives from the Ministry of Agriculture, GCNA, and MNIB, journeyed to the farm of Phillip at Belvedere, St. John and demonstrated the grafting technique to convert the trees.

According to Agricultural Instructor at the Mirabeau Propagation Station, Sherwyn Joseph, the results of grafting should be seen six weeks after it has been done.

“With this technique, once we have selected the female plant with the desirable characteristics – large seed, thick mace – we take the budding material from those plants and graft it on to the male plants. After the budding process, it will take about four to six weeks, and the farmer will have to observe the graft and remove the tape once he realizes that the bud is active. He/she will notice that the bud that grows out, will be a female bud,” Joseph explained.  This grafting technique was developed and tested as part of the European Union funded Spice Research Project.

CARDI Representative, Reginald Andall, said this is one of the measures that were agreed upon, as the GCNA asked for assistance in developing Grenada’s Nutmeg Industry.

“One of the areas that they requested was in the determination of sex of a nutmeg tree before it flowers. Traditionally, we have waited for up to seven years when nutmegs declare to identify a male tree or a nutmeg tree. Naturally, after making such an investment for seven years and then discover that you have a male tree. That is a total loss in your investment as a farmer…

“… The Nutmeg Association approached us to come up with new ways, which we can identify the sex of a nutmeg tree even before it is planted out by the farmer, because they want to ensure 90 to 95 percent of female nutmeg trees are planted out on the farmer’s field,” Andall said.

Farmer, Ambrose Phillip, said with this assistance, his future in nutmeg looks promising.

He said, “I believe that there is a future in Nutmeg. I cannot forget that book that was written by George Brizan called “Grenada’s Black Gold”. I believe that nutmegs remain our Black Gold. I think the GCNA, while they have continued to sell whole nutmegs to our European and other buyers, they have also tried to increase the value added, in terms of what we export. You would find that they are doing more ground nutmegs; they are doing jams and jellies, for example.”

Phillip said, he would be happy to contribute to that thrust.

General Manager of the GCNA, Roderick St. Clair, said it is GCNA’s mandate to develop and market nutmegs.

“As guardian of the industry and in an effort to increase the output of farmers, the effort to have less males is significant. We add value to an original male tree by grafting on to it the female. This would give us the desired quantity we want at the end of the day and give farmers more surety of their investment,” St. Clair stated.

He further encouraged farmers who face the same problem to get in touch with the GCNA, so that they too can benefit.

Training in the area of grafting is needed, he said, as a means of building capacity and sustainability; an opportunity for young people to get into.