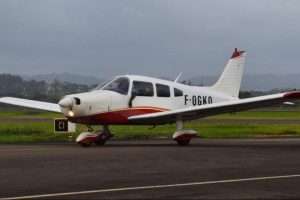 stlucianewsonline.com- A bag and a passport have been found in the sea as a rescue mission for a plane that crashed off Dominica on Sunday evening continued on Monday morning.

CEO of the Dominica Airport and Seaport Authority (DASPA), Benoit Bardouille, said a search and rescue mission continue on Monday morning and from information he has the two items have been found so far.

He said the items were found in a location that was given to him by telephone.

“Within that area thus far,a bag and a passport have been found, so there is some sort of active search now within that locality,” he explained.

Bardouille stated that on the aircraft were two crew members and two passengers.

“So four souls are on that aircraft ,” he stated. “What we are doing earnestly is to try to see how we can find the aircraft and the four souls that were on board.”

The Piper F-OGKO went down after taking off from the Douglas Charles Airport, located on the northeastern part of Dominica, on Sunday evening.

Bardouille explained the French-registered aircraft was given clearance to take off from the airport for Raizet Airport in Guadeloupe.

He stated that the air traffic controller took a look at the radar at the airport but could not identify the aircraft.

The airport in Guadeloupe was immediately contacted and Douglas Charles control was informed that there was no information on the aircraft.

Bardouille said the necessary procedures in such situations went into play.

He remarked that fire service was contacted by a private citizen saying that they had seen something in relation to an aircraft that may have gone down into the sea.

Assistance we sought from local fishermen immediately while the mobilization of the coast guard was taking place.

“Guadeloupe was notified as well as the Eastern Caribbean Civil Aviation Authority,” he said/

He explained that a search and rescue mission continued late into the night with two helicopters, the local coast guard and the fishermen.

It continued on Monday morning he said.

Bardouille said what is being done now is to locate the aircraft.

“We are hoping something may happen since the aircraft may not have gone too far away from the airport but certainly we are very concerned and we are doing everything, along with the police as well as the French authorities to see how we can do any rescue or retrieval of anything that would provide the kind evidence that is required for an investigation,” he stated.

He also said the Douglas Charles Airport was not affected and remained open on Monday morning.

An investigation into the crash will be conducted.