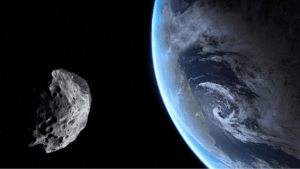 stlucianewsonline.com- An asteroid bigger than the tallest building in the world is hurtling towards earth but will miss the planet by 3.6-million miles, NASA has said.

It is expected to zip pass earth at around 6:05 EST on Saturday morning.

The space object has a diameter of around 3,250 feet, making it significantly bigger than the Burj Dubai, which is currently the tallest building in the world.

Due to its dangerous orbit and massive size, the approaching space rock has been labeled as a potentially hazardous asteroid.

“Potentially Hazardous Asteroids (PHAs) are currently defined based on parameters that measure the asteroid’s potential to make threatening close approaches to the Earth,” NASA explained in a statement.

NASA and other space agencies warn that if such an asteroid were to collide with earth, it would trigger a nuclear winter, mass extinction and would kill millions.